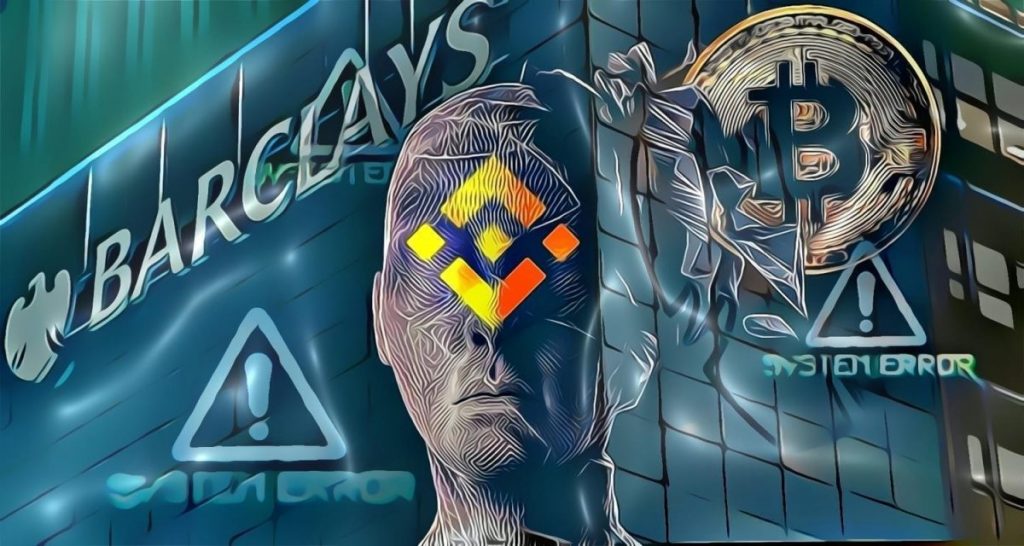 Barclays is blocking payments to Binance from credit and debit cards. They cannot be used to pay on the exchange. The suspension includes transfers and occurs within the framework of stricter regulation of activity in the country.

Barclays, a UK banking and financial services company, has decided to restrict “until further notice” payments to the cryptocurrency exchange Binance that are made with debit or credit cards. The entity officially announced the news this Monday, July 5, although warnings were already known from the previous week, and users showed their disapproval on Twitter.

The firm’s clients learned of this new restriction as early as last week when some Twitter users published a message that they would have received in the bank’s application. “As you have made a payment to Binance this year, we want to inform you that we will suspend payments to them (Binance) with debit or credit cards until further notice,” the statement said.

Already on Monday, the bank’s user assistance account on Twitter was in charge of responding to the claims that began to arrive through this medium.

«It is our responsibility to protect your money. With this in mind, we made the decision to stop debit or credit card payments to Binance until further notice, to help keep your money safe. We regret any inconvenience this may cause,”

says the response, replicated in several different threads of this social network.

«The security of your account is a priority for us. For more information on Binance and investing in crypto assets in general, please visit the website www.fca.org.uk, “says another tweet, recommending checking with the UK’s Financial Conduct Authority (FCA).

So far, Binance has not officially communicated anything about it, beyond a post with advice on responsible investing and the phrase “Good investors are not gamblers.” Meanwhile, its CEO Changpeng Zhao gave his opinion on the matter with a simple emoji of a pair of eyes in response to a query from a user.

Angered by the decision, customers of the British bank did not hesitate to express their discontent on Twitter. Specifically, what many argue is that Barclays does not restrict payments to bookmakers or the purchase of high-value goods, but does so with an investment platform, as many of them consider Binance.

In this sense, the user @hukaleksandra stated:

“@Barclays stopped my payments to a crypto exchange to ‘protect my money’. They’ve got no problem letting me gamble or buy expensive things, yet they’re trying to ‘protect’ me from something I’ve made a small fortune on. GTFO you bunch of crooks. I know how to handle MY OWN money”

Onde of the tweets complaining about Barclays bank.

After several messages in the same vein, one from @banners82 also stands out:

“Protect their money or protect your money? Crypto is a big threat to the banks.”

can be read among several statements by people who would close their accounts at the institution.

Binance’s background in the UK

The recommendation to consult with the FCA is a constant in Barclay’s customer service messages, and it is not by chance. It is because the UK government has taken several measures in recent weeks in relation to cryptocurrencies and exchanges, among which Binance is one of the most visible.

As reported by CriptoDeFinance, the exchange was restricted from providing financial services related to cryptocurrencies in the region, since it is an activity only authorized for entities that have this permission. Given this, Binance began to dialogue with the authorities to adapt to the current legal framework, but in any case, it continues to receive regulatory setbacks that limit the possibilities of its users both in Europe and in the rest of the world.