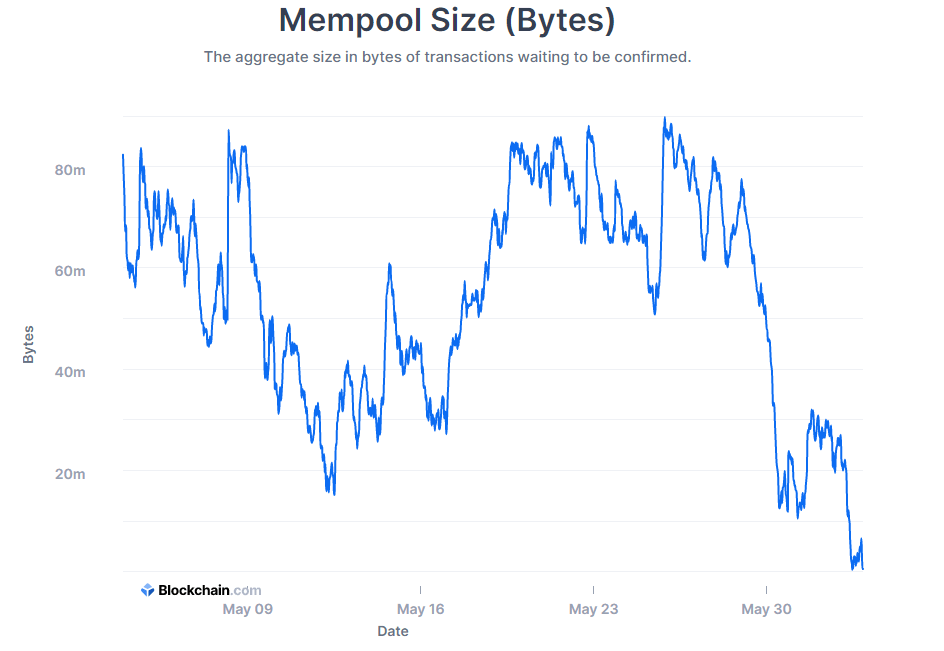 This case may be related to the Chinese Mining Ban, causing a drop in the network’s hashrate and leading to Bitcoin Mempool being almost empty, meaning faster and cheaper transactions.

In recent weeks, the Bitcoin Mempool was practically empty this Wednesday, 2nd, 2021, after the China Mining ban. It is noteworthy that this scenario was hardly seen in 2021 when the Bitcoin network was congested most of the time.

Mempool is a space where Bitcoin transactions wait to be confirmed by miners. When it is complete, this indicates that the network is congested, resulting in more expensive fees for those who need to carry out faster transactions.

While waiting to be committed, a transaction expects to be included in a valid block, but the blocks are limited in size. That is, a transaction can stay in the Mempool for a long time when the network is congested, causing problems for those waiting for transfer confirmation at cheap rates.

On the other hand, when the Mempool empties, the Bitcoin network is processing transactions faster.

With about 5,000 transactions awaiting confirmation on Wednesday, the Bitcoin network shows an impressive speed for those who intend to trade values ​​today.

In practice, why is it important to note whether the Bitcoin Mempool is empty or not?

Bitcoin’s network is decentralized, thus maintaining its security and transfer validation by the miners.

As fewer transactions are stopped on the web, a person who wants to use Bitcoin as a means of payment can process amounts quickly and pay more periodic fees.

Another vital example to observe if the Bitcoin Mempool is empty is when a person has several addresses and wants to consolidate their balances, which is an opportunity for this action.

With the departure of some miners from the space, the difficulty of mining Bitcoin dropped, which may have attracted new participants to the activity.

Another measure that has fallen is miners’ profit from network fees, which is also the lowest in two months, possibly affected by the drop in congestion on the Bitcoin network.

Since China started to attack the mining activity in the country, which concentrated a large part of miners, the network’s hash has dropped, but it is still far above what has been seen in recent years.

This measure guarantees the security of the Bitcoin network; that is, the more, the better.