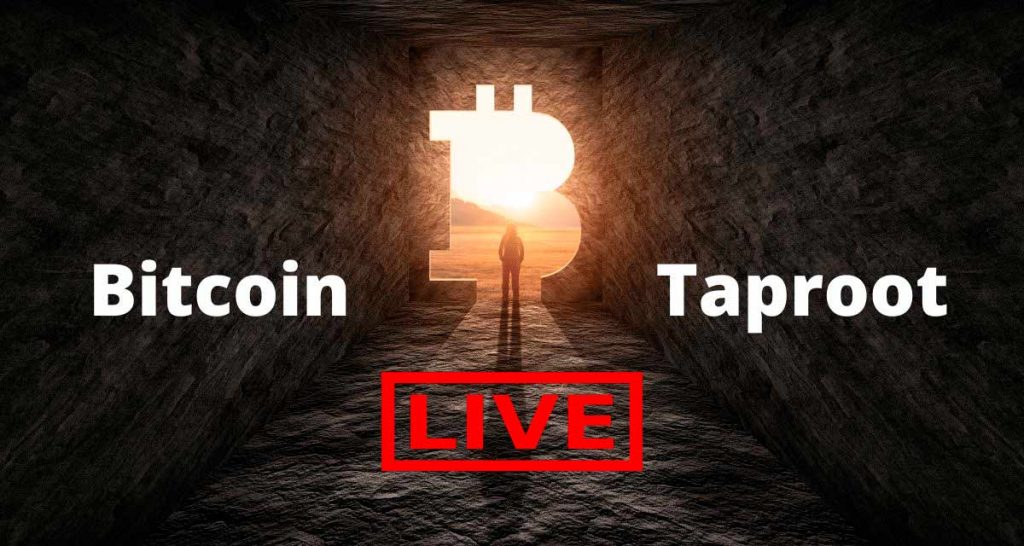 Taproot update is the most anticipated Bitcoin update in recent years, and it is now finally fully activated after much waiting.

It consists of the approval of three proposals to improve bitcoin (BIP), BIPs 340 (Schnorr), 341 (Taproot), and 342 (Tapscript), and its main objectives are to enhance security, efficiency, and, above all, the privacy of users.

These BIPs are related to Schnorr’s signature, the Taproot itself, and the Tapscript.

The main success of this upgrade is now in the hands of services and users who can choose whether they want to use the new features and pave the way for smart Bitcoin contracts.

The protocol went live during the early hours of this Sunday, November 14, at the height of block 709,632. The block was mined by F2pool and contained the message: “gm taproot,” or good morning taproot.

Miners had already signaled support for Taproot in June of this year, and, for safety reasons, its introduction took five months to be implemented finally.

From now on, Bitcoin has better tools to make transactions more private, efficient, and less expensive and make its smart contracts more flexible and advanced.

The Schnorr signature takes the last name of its creator, Claus-Peter Schnorr. And although it existed on the date of the creation of Bitcoin, the signature was not used because the patent was still active until 2008.

It is worth noting that in January 2009, the genesis block was mined. However, Satoshi Nakamoto was already working on the project before that.

Because of this, Nakamoto used ECDSA (Elliptic Curves Digital Signature Algorithm). As the name suggests, it is an algorithm that ensures that its proper owner can only make a transaction.

In other words, it is responsible for generating the private and public keys, allowing the funds to be spent through a digital signature.

As Schnorr’s signatures are simpler than ECDSA’s, its use in Bitcoin has been mentioned since 2012, being cited numerous times.

So, after years of waiting, they finally made it to Bitcoin this Sunday, 14th, along with Taproot and Tapscript.

Altogether, these proposals do several important things to the Bitcoin Network:

This use is widespread by companies for a best practice of security of funds, but it is not limited only to that.

As these multiple subscriptions may require more parts, such as 5 out of 8 subscriptions, these transactions get heavier.

Since Schnorr’s signatures can reduce their weight with lighter transactions, lower rates, and take up less space on the blockchain as a whole.

Another improved point, and expected by many, is privacy. Now multisig transactions will be identical to regular transactions, making their identification difficult.

Two cases that will benefit directly from all of this are CoinJoin. Several people merge their transactions into just one, making it difficult to track the traded currencies in the lightning network during the opening of private channels.

That said, its adoption will be significant for this greater privacy to be impactful within Bitcoin.

While Taproot will not immediately turn Bitcoin into a competitor to Ethereum in terms of smart contracts, its language will be improved in both the first and second tiers, as in the case of the lightning network.

In this way, Bitcoin can have more use in its contracts and hide certain parts of a script, which did not need to be executed, revealing only the completed piece, making these transactions lighter and, therefore, cheaper.

Finally, the addresses used will be bench32m — a variation of the bench32 introduced with SegWit — and will start with the characters bc1p.

How long for user adoption?

As this Bitcoin update is not mandatory, users will continue using the network as they have always used it.

A good comparison is SegWit, introduced in August 2017, which took more than a year to reach 50% of network usage, although still growing.

However, it is worth remembering that this update will not be used as much by transactions and ordinary users compared to SegWit.

Despite this, multisig transactions already represent 11% of all transactions, and this update, as used, will benefit all network users.

What economic and financial impact would Taproot have on the market?

The improvements promoted by this update are more related to the experience of downloading Bitcoin.

The transaction rates tend to be lightweight, and there will be more transactions per block, but it is believed that because the changes are more technical, they will only really be felt by those who do many transactions in the block.

How will Bitcoin price be affected?

Bitcoin price will not be affected by this update, at least not directly.

When miners announced months ago that there would be Taproot, for example, the price of bitcoin didn’t change at all.

We will see yet if the price will swing after this update.