What is Blockchain? Complete Guide 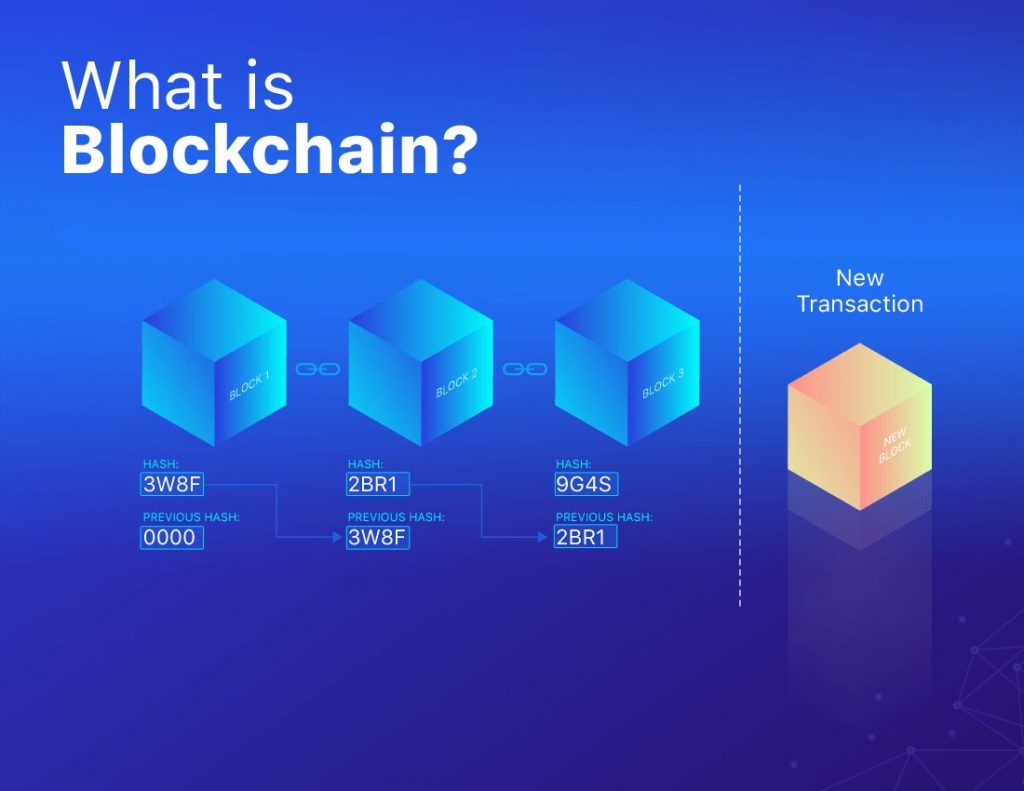 What is Blockchain?
In simple terms, the definition of blockchain is a shared digital book or database of financial transactions that are stored on multiple computers in different locations. The database grows constantly as new transactions or “blocks” are added to it.

In recent years, you may have noticed the term “blockchain,” which has appeared more frequently. It is understandable if you consider that many people are comparing the importance of blockchain technology with World Wide Web technology in the 1990s. But what is it? How does it work?

Most importantly, how can you position yourself to capitalize – which could be – a massive opportunity for growth. Read this article to find out!

In simple terms, Blockchain is a shared digital book or database of financial transactions stored on multiple computers in different locations. The database constantly grows as new transactions or “blocks” are added, forming a continuous data chain where the records are public and completely verifiable. Since there is no central location, it is more difficult to hack the system, as the information exists on millions of different sites.

2- The Story of Blockchain

What is the history of Blockchain?
The first Bitcoin article was published in 2009 by the mysterious Satoshi Nakamoto. It provided the economic fundamentals and technical keys for creating a new cryptocurrency.

It was the first innovation in technology and resulted in a price bubble with exponential growth. Today, Bitcoin is used by millions of people for payments. Other digital currency alternatives are already emerging, as well as innovative contract platforms, such as Ethereum.

In 2015, the first tests outside of Bitcoin took place. That year, Nasdaq (the leading North American automated stock market for technology issues) decided to roll out the first blockchain-based test products.

Many financial and stock market companies started to conduct tests linked to the Blockchain from that moment on. The Hyperledger project, for example, operates on a global scale and is run by the Linux Foundation. Launched in December 2015, it is the largest open source community related to the Blockchain on the planet.

As of 2017, these conceptual tests have been transformed into fully functional development. At that time, new partnerships were formed with other sectors to manage large blockchains. Companies like IBM already integrate blockchain technology for some of their foremost transactions.

3- What is Blockchain Technology?

Blockchain is a shared and immutable ledger that facilitates the process of recording transactions and tracking assets in a business network. An asset can be tangible (a house, a car, money, land) or intangible (intellectual property, patents, copyrights, and branding). Virtually anything of value can be traced and traded on a blockchain network, which reduces risks and costs for everyone involved making this technology a true Game Changer.

Three leading technologies combine to create a blockchain. It includes encryption of the private key, a distribution network with a shared ledger, and an incentive to maintain network transactions, maintenance, and security. These factors are combined with:

Most traditional forms of payment are centralized. For example, your bank stores your money and, to pay someone else, you need to go through the bank.
This process has several vulnerabilities:

In a decentralized system, like the one created using blockchain technology, information is not only stored by a single entity. Everyone on the network knows and can access the transaction history but cannot change it. This immutability is another fundamental pillar of blockchain technology.

According to the proof of work principle, the network involved in the operations gains a unique and cryptographically calculated identification based on the exact time.

After something is inserted into the Blockchain, it cannot be tampered with. There is no way to “tinker with the books.” It is because this technology uses encryption in your data.

In the context of payments, this means that transactions are treated as input and executed using a hash algorithm that provides output with a fixed length and size so that each hash can identify an extensive set of calculations or data streams.

Perhaps the most exciting aspect of blockchain technology is that it offers a high level of transparency and privacy at the same time. A user’s identity is hidden behind complex encryption and can only be identified by his public address.

At the same time, as long as the user’s identity is secure, you can still view all transactions made on your public address. This level of transparency does not exist in any current financial system, which is why blockchain technology is changing the area of ​​finance, as we will discuss later in our article.

Valid transactions that take place on the network are certified by a consensus of most participants. It means that a large chain of operations indicates which block will be accepted by the majority, reinforcing the lack of need for a central figure.

This last principle defines that any member that temporarily disconnects from the network will be immediately obliged to approve the largest chained block of transactions as soon as it returns. This feature reduces the structure for the transfer processing to continue.

5- How does Blockchain work?

As an example, let’s say that David intends to send money to John using blockchain technology. This transaction would be represented online as a block. This block would be distributed over the blockchain network, a particular type of peer-to-peer network in which the workload is divided between the participants instead of a central server.

After the network verifies that the transaction is valid, the block is added to the chain and joined by the network, creating a permanent record. David’s record on the ownership of the money passes to João. In short, technology helps eliminate the middleman, but with complete transparency and privacy.

Like a peer-to-peer network, combined with a distributed timekeeping server, public blockchain ledgers can be managed autonomously to exchange information between the parties. There is no need for an administrator. In effect, Blockchain users are the administrator.

The second form of Blockchain, known as private or permissioned Blockchain, allows companies to centrally create and manage their transactional networks that can be used inter or intra-company with partners.

In addition, Blockchain networks can be used for “smart contracts” or scripts for business automation that are executed when certain contractual conditions are met.

For example, after a bad batch of lettuce made customers sick with e-coli, Walmart and IBM created a blockchain-based supply chain to track products from the field to the table.

Walmart asked its product suppliers to send their data to the Blockchain database by September 2019. Once on the Blockchain, production can be automatically tracked through intelligent point-to-point contracts, removing human intervention and error.

De Beers, which controls about 35% of the world’s diamond production, has also launched a blockchain-based supply chain to track the authenticity of diamonds and help ensure they are not coming from war-torn regions, where miners are exploited.

Smart contracts can also be used to approve the transfer of assets, such as real estate.

Once the conditions are met between buyers, sellers, and their financial institutions, sales of properties can be confirmed on the DLT. For example, ShelterZoom, based in New York, is launching a real estate app that allows real estate agents and customers to view all offers and acceptances in real-time.

It will also enable online access to property titles, mortgages, legal documents, and home inspection through the Ethereum-based encrypted ledger.

The BlockChain system may seem confusing, but, as we mentioned above, it is straightforward and has significant advantages for the future of companies, fintech, and other technology areas.

Among these main advantages are:

It is a healthy, transparent, durable system, with reliable and resistant to hacker attacks because it does not have a central point of failure;

All information made through transactions cannot be deleted and altered in BlockChain, that is, greater security and less corruption;

Transactions carried out through BlockChain must be processed in minutes, and because it is a virtual process, they can be executed every day at any time;

But as this technology is still at the beginning of its advances, these are just some of the benefits it can bring to the market.

Over the next few years, mainly with this dispute between the great world powers to become a reference in BlockChain, the system will bring other significant advantages and benefits for citizens and companies worldwide.

8- How is blockchain in addition to cryptocurrencies?

As we have seen, one of the most valued attributes of this technology is security. It can go beyond cryptocurrencies and be helpful in several areas, being possible to apply Blockchain in digital marketing, in the logistics chain, in the approval of public budgets, and in the protection of privacy and intellectual property.

Regardless of your industry, it is essential to understand the way that Blockchain can be applied in the most diverse types of services, such as:

It is exciting to see all these developments. I am sure not all of these will make it into successful long-term ventures, but if they indicate one thing, then the vast potential the blockchain technology is offering.

IBM’s Blockchain for Dummies is now in its third edition. IBM has already introduced the Blockchain to more than 68,000 readers.