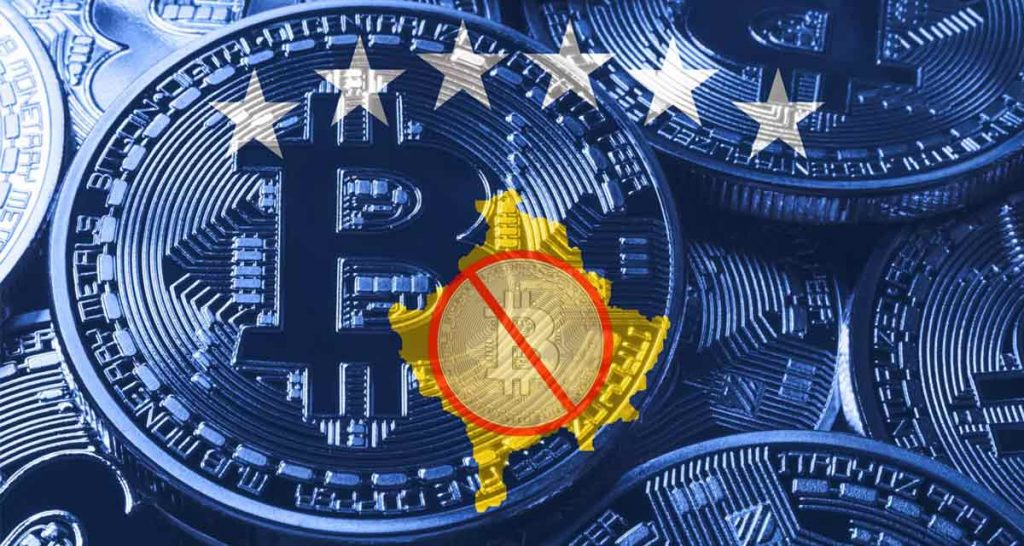 Authorities seize equipment used to mine Ether and Bitcoin, such as video cards and ASICs leading to a war on Bitcoin Mining. Cryptocurrency Miners in Kosovo may earn up to 2,400 euros per day since it is a low-cost energy producer, which is why many young people opt to mine Bitcoin.

As a result of “expert” suggestions, it has prohibited Bitcoin (BTC) mining, as mentioned in a statement by the country’s Minister of Economics, Artane Rizvanolli, made public on Facebook.

The announcement defended the measure to curb electricity consumption when facing the worst electricity crisis in recent years.

“All law enforcement agencies will stop immediately the production of this activity in cooperation with other relevant institutions that will identify locations where there is the production of cryptocurrencies,” it was said in a statement.

Kosovo, a country with little international recognition located in southeastern Europe, is a low-cost energy producer, which is why many young people in the country have chosen to dabble in the cryptocurrency mining sector.

However, due to recurring power failures at sizeable coal-powered facilities and high import prices, local authorities were compelled to implement planned power cuts.

The restriction on Mining is part of a suggestion made by the Technical Committee for Emergency Measures in Energy Supply, which was established in December to deal with the energy crisis, as was previously noted.

Cryptocurrency miners are getting profits of up to 2,400 euros.

Reuters news agency spoke with a Kosovar cryptocurrency miner, who preferred anonymity. The specialist, who operates 40 GPUs, revealed that he pays about €170 per month for electricity, while his earnings from Mining exceed €2,400.

The cryptocurrency mining sector has established itself in the country’s northernmost territory, which is primarily occupied by Serbs who refuse to pay for energy because they do not recognize the independence of Kosovo.

A report by the Efe news agency claims that about 10,000 people in Kosovo are already using bitcoin. Despite this, there is no accurate information on the value of bitcoin transactions in the country.

War on Bitcoin Mining in Kosovo.

As mentioned initially, Kosovo became the first European country to ban Mining. However, intentions to ban the activity date back months ago.

In November, two Swedish regulatory bodies wanted bitcoin and other cryptocurrency mining to be banned in Sweden and Europe.

However, in this case, the grounds are predicated on the purported environmental effect of Digital Mining, even though it is far smaller when compared to other economic activities in this country.

Following the ban on mining activity, Kosovo authorities are confiscating equipment such as video cards to mine Ethereum (ETH) and ASICs used to mine Bitcoin (BTC).

The attempted ban began last Tuesday, January 4th, 2022, and the seizures started shortly after. The first was reported on Thursday, January 6th, and two more on Saturday, January 8th.

In total, 67 video cards (GPUs) were seized in the first apprehension, allegedly used for mining cryptocurrencies such as Ethereum (ETH).

The two other apprehensions, which occurred on Saturday 8th in Pristina, were contained in one of their only video cards.

Police said they confiscated 39 GPUs, 35 of which were in operation at the raid.

On the other hand, the second one focused on more industrial production. 272 Bitcoin (BTC) mining equipment was seized from a warehouse in Mitrovica.

All were of the Bitmain brand, with different Antminer S9 models.

As many countries are not prepared for the increased demand for energy, they run the risk of shortages, leading to blackouts.

Kosovo is not the first country to face mining-related problems. China used the excuse of energy expenditure to expel cryptocurrency miners from their homeland.

It is unclear whether the measure to ban cryptocurrency Mining is permanent or until the crisis is overcome.

Some of them probably faced the same problem in other regions like Kazakhstan, following the last events in that country.

The same is true in other places where energy is cheap. Iceland had to bar new Bitcoin miners from entering in December last year to avoid facing more significant problems later.

Countries that are better prepared may be ahead in this dispute. Besides taxes, the activity generates employment in the regions and makes the economy go round.

What is certain is that, right now, Kosovo leaves the list of countries that minted Bitcoin without any legal consequences, perhaps paving the way for miners to move to other countries to continue Mining cryptocurrencies.