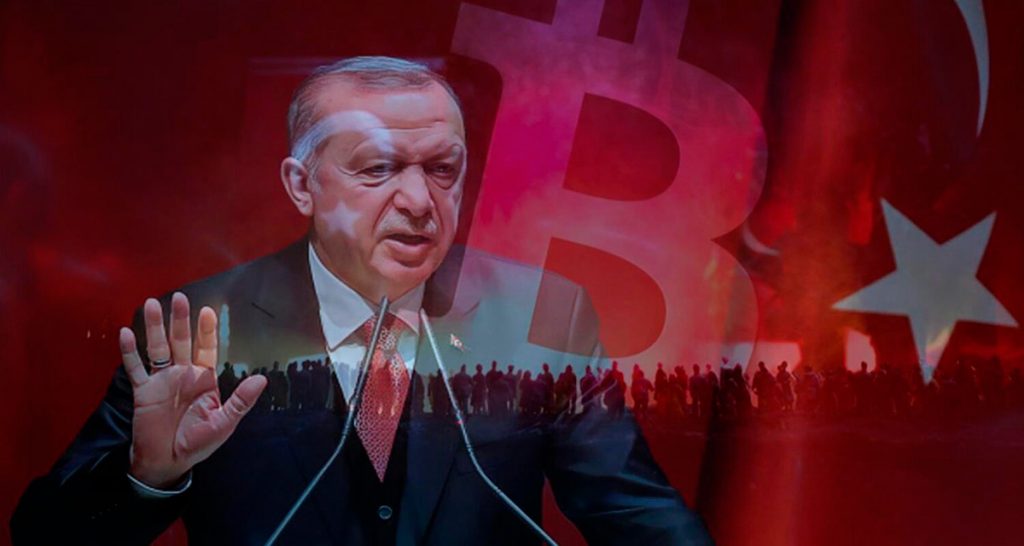 Since April 30th, the trading of bitcoin and cryptocurrencies is prohibited by Turkish President Erdogan. The Country is making progress in developing a digital currency issued by its Central Bank. Now Tukey is oficially in a war against Bitcoin.

“We are in a war against Bitcoin.” These words belong to Turkish President Recep Tayyip Erdogan and he spoke them on Saturday, September 18, 2021, at a meeting with students from his country.

The president made such an assertion when asked if the Central Bank of Turkey was willing to review its position on the use of Bitcoin (BTC) as a means of payment. This entity had prohibited the use of cryptocurrencies since April 30 of this year.

The current Central Bank statement details that this prohibition “prevents crypto assets from being used directly or indirectly in the provision of payment services and in the issuance of electronic money.”

This Saturday, Erdogan was emphatic, not only that the ban will not be lifted, but that actions will be taken to prevent the proliferation of the use of BTC among the Turkish population. The devaluation of the lira, legal tender in that nation, leads many citizens to see bitcoin and other cryptocurrencies as a way to preserve their heritage.

Currently, due to the ban, crypto-asset trading in Turkey is carried out only in hiding.

No to Bitcoin, Yes to Digital Lira

To the bans on the use of bitcoin is added the interest of the Central Bank of Turkey in launching a digital currency. This is an idea that emerged in 2019, and according to the information agency Bloomberg, the concept stage has already been completed to move to a testing stage.

Several technology companies such as Aselsan and Havelsan will participate in this phase, as well as the Science and Technology Center of the Eurasian country.

Unlike bitcoin or other decentralized cryptocurrencies, central bank digital currencies (or CBDC, for its acronym in English) are usually developed as a large database in the possession of some state entity in which the transactions carried out are recorded.

The most advanced country in this type of currency is the Bahamas, which already has its “sand dollar” in operation. But undoubtedly the best-known CBDC is China’s digital yuan which is in the late stages of its testing phase.

The Chinese state cryptocurrency is expected to be fully operational by the Winter Olympics, which will take place in Beijing, in February 2022.

If the digital currency of the Central Bank of Turkey follows in the footsteps of other CBDCs, financial privacy or anonymity in transactions will not be a possibility and the Government, or whoever it authorizes, will have access to the history of operations of each person. All this, in the words of Chinese officials, is to “help people get their money back and protect their safety [in case] of fraud.”