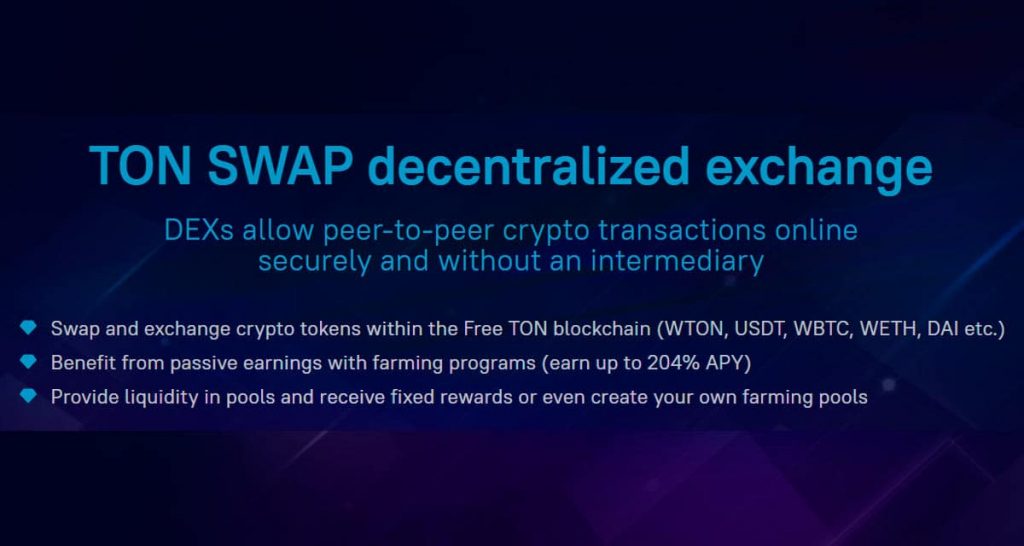 TON swap allows decentralized exchanges and Yield Farming and was originally created by Telegram for its messaging platform based on FreeTon, the telegram blockchain project.

Free TON is the continuation of the blockchain project initially developed by Telegram, which was left in the hands of the community.

Now with a more established ecosystem, this project has introduced TON swap, a DeFi platform that promises decentralized exchanges within the TON network, with very low fees. In this article, we will analyze everything related to this exchange platform.

In addition, Free TON has a protocol that allows the interaction between the TON network and Ethereum in a simple way known as TON Bridge, powered by Broxus, a blockchain solutions laboratory and member of the Free TON DeFi Alliance.

The bridge basically enables the exchange from the Metamask wallet (Ethereum network) to the Crystal Wallet (TON network) and vice versa.

This bridge mitigates the risks of increasing congestion, high transaction time, and high fees, and so TON Swap makes a very interesting alternative.

What is TON Swap

TON Swap is a decentralized exchange or DEX, that allows its users to carry out DeFi operations of liquidity provision and Yield Farming with tokens belonging to the Free TON network.

Its development occurs almost a year after the launch of the Free TON project, which revived the blockchain abandoned by Telegram called Telegram Open Network and without the explicit collaboration of this messaging company.

The TON Swap exchange, as expressed on its own website, seeks to offer much faster and cheaper exchanges between tokens, since, compared to Ethereum, the network fees are just US$0.01 as of the date of this article.

Crystal Wallet is the name of the wallet that will allow you to use TON and all the Dapps built on this network. This wallet is for the Free TON blockchain what Metamask is for the Ethereum blockchain and allows you to securely manage your seed phrase, public and private keys, and wallets without leaving your favorite browser.

Like Metamask, in order to use Crystal, you must install the browser extension available for Google Chrome. The wallet has a 12-word seed phrase for secure login.

Once installed, you can start using TON Swap services. Its installation and use do not vary at all from any other cryptocurrency wallet that you have been able to use in the past, so it does not generate any friction.

If you have had the opportunity to interact with any DeFi or DEX platform, you will have noticed that to exchange Ether (ETH) or the native cryptocurrency of the network, you do not use ETH directly, but an ERC20 token anchored 1: 1 with the value of ETH known as WETH or “wrapped” Ether.

Read More  CBDC and Cryptocurrencies - Here are some key differences

Basically, the same thing happens in TON. The network’s native cryptocurrency is called TON or TON Crystal. However, to interact in TON Swap or any of the Dapps built on the network, you must operate with a TIP3 token (an acronym for TON tokens) anchored to the 1: 1 TON known as WTON.

If you want to convert TON to WTON or vice versa, you should go to the WTON.io page. The exchange process is quite simple since it is only to put the amount to be exchanged and confirm the transaction from your Crystal wallet. The cost of the exchange is 1 TON.

TON swap and its exchange experience

TON Swap uses a design pattern very similar to those found on various decentralized exchange platforms such as UniSwap.

The main window is made up of a single box in which users must place the token to send and receive, confirm the transaction from their Crystal wallet and that’s it.

Another point in favor is in the commissions and the speed of confirmation. In the test carried out by us exchanging a total of 4 TON for USDT, the fees were 0.004 USD and it was done almost instantaneously.

The network fees are much lower than those currently handled on the Ethereum network. Although the block times in Ethereum are 15 seconds, due to the congestion that it currently suffers, the fees can be above 10 USD per transaction to ensure entry into the next blocks.

The liquidity of decentralized exchanges like the TON Swap is provided directly by the community. The greater the number of users, the greater the liquidity, which in turn translates into better exchange rates.

At the time of writing, there were 16 tokens available on TON Swap, including widely used tokens like USDT and USDC, and even WETH and WBTC, which gave me a pleasant sense of security and freedom to trade.

The system is quite simple: to add liquidity it is necessary to do it in trading pairs. The purpose of this is that the deposit does not affect the liquidity of the market. Once the liquidity provision in the Crystal Wallet is confirmed, you receive a receipt specifying the amount of LP tokens that you will receive in exchange.

The profitability of the liquidity provision depends on the participation or share that represents the total deposited with respect to the total pool in 24 hours and the profit is obtained in LP tokens. 1.69 LP tokens in our case.

The farming is the mechanism that allows users to generate profits in the TON token Swap platform performing LP staking of tokens in the pool chosen. Its operation is based on depositing the LP tokens that are generated through the liquidity pools in a smart contract.

This tool offers much higher interest than the liquidity supply can offer. In the image, you can see farming pools, such as WTON-USDT that offer up to 177% annual interest.

It should be remembered that farming is only done through LP tokens. The benefits of farming in TON Swap can be quite profitable thanks to the good interest rates that it integrates.

In addition, liquidity providers obtain income from trading commissions that represent 0.3% of the volume with respect to their participation, share, in the group.

How much liquidity does TON Swap have?

As we mentioned before, the liquidity of this type of market depends on a lot of the mass of users. Although this platform can be considered “new”, it handles quite considerable trade volumes and with very good exchange rates.

From the Pairs section, you can track the total volume of each market. One of the most used is the WTON / USDT market, which has a Total Blocked Value (TVL) of more than 5 million dollars, with daily volumes above 300 thousand dollars. In total, TON Swap has a swap capital (TVL) of over 16 million dollars, as of the date of publication.

Use Ethereum in TON Swap with Bridge

Ethereum is par excellence, one of the most used networks in terms of Dapps. While Binance’s Smart Chain network has taken hold, Ethereum is still the leader. However, this leadership has its cost, and that is, currently this network suffers many saturations causing rates to rise drastically.

Thanks to the Bridge protocol, users can go from using Ethereum to making exchanges in Free TON, with much lower fees and confirmations.

This TON Swap bridge facilitates interoperability between blockchains, allowing you to connect your TON Crystal wallet with your Ethereum Metamask wallet.

Wallets such as MetaMask, WalletConnect, and others that support ERC20 tokens can be used to transfer them to the TIP3 token standard on the Free TON blockchain. This makes TON Swap a very attractive option to use instead of Uniswap.

The remarkable thing about this bridge is its ease of use. You just have to connect both wallets, Crystal and Metamask, and you can immediately send between networks. This process does not require any commission payments other than those charged by the network.

This system allows an easy adaptation to the TON Swap platform for users accustomed to using platforms such as UniSwap.

The integration of tools such as Bridge makes it very attractive and a potential competitor to all of them, as long as its mass of active users increases.

Although at the beginning and only once when setting it up, it may seem a bit complicated, then its use becomes very simple and intuitive.

The operation of liquidity provision and farming is very easy and fluid together thanks to a very intuitive interface, which makes it very attractive for users of any level of expertise.

In terms of usability, TON Swap is, in short, an excellent exchange. Very fast exchanges, almost instant confirmations. Low commissions. And all this from a totally decentralized platform, without coins in custody or anything like that.