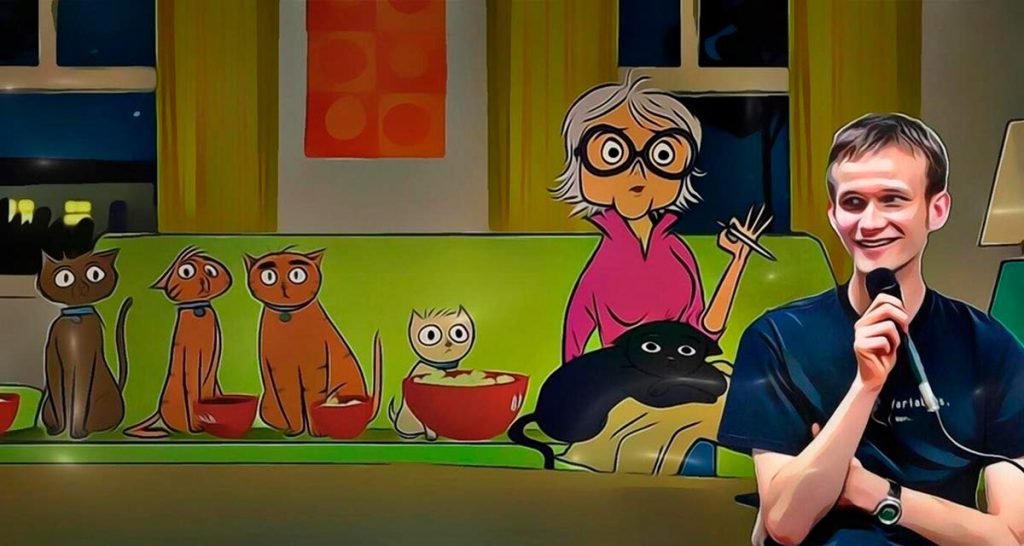 The new Vitalik Butterin project is called Stoner Cats. Is an adult animated series, a token and to watch each show you need to buy one of the NTFs, which are also compatible with MetaMask, Rainbow, or WalletConnect. Mila Kunis, Jane Fonda, Chris Rock, and Ashton Kutcher also participate in the series along with Vitalik Butterin itself.

The creator of Ethereum, Vitalik Buterin, will venture into the world of entertainment, to give life to one of the characters of the new animated series Stoner Cats.

The audiovisual piece has a financing campaign through non-fungible tokens (NFT).

The NFT Stoner Cats are represented by each of its characters. Each token is priced at 0.35 ETH, which is equivalent to US$784.

Buterin will give his voice to Lord Catsington, a dead cat who imparts his knowledge to five other cats belonging to Mrs. Stoner. She is an octogenarian with Alzheimer’s whose magic herb has somehow given her feline companions the ability to speak, according to Coindesk.

Morgan Beller, a member of the team behind Stoner Cats, explained that the reason for using NFT as funding for the series is to avoid censorship, as Stoner Cats talks openly about drugs. In addition, it is a way to avoid the creative influence of television channels or broadcast platforms.

To be able to see the animated series, in the first instance you must buy ether (ETH), Ethereum’s native cryptocurrency, then it must be sent to a non-custodial wallet that is compatible with MetaMask, Rainbow, or WalletConnect, and there the token called Stoner Cats is acquired. The collectible gives access to a club, which gives you access to all the episodes, and exclusive content.

The creators of the series consider that through blockchains, there is a new way of approaching the public, interacting and knowing their points of view, as well as knowing what they want to see and even being part of the creative process.

The rest of the characters will be played by various Hollywood stars such as Mila Kunis, Jane Fonda, Chris Rock, Ashton Kutcher, and Seth MacFarlane.

Each episode will have between five to seven minutes long and was developed by three industry veterans: Chris Cartagena, Sarah Cole, and Ash Brannon. Ash drew and animated every frame of the pilot episode. It was then edited by Chris and Sarah. This amazing show is created by only three elements unlike the massive animation teams of traditional studios.

How will the actors be paid?

Each of the actors will be paid for their participation in the series with ether. In fact, Beller says they had to teach Jane Fonda how to set up a MetaMask wallet.

The group of players will earn exactly the same amount of cryptocurrencies, however, that will depend on how much they raise in funding during the launch of the NFT.

“To finish the season, the Stoner Cats team must reach at least 50% of its funding goal of 10,420 NFT,” explained Beller, who also worked on Facebook’s Libra project.

Among the creative team and NFT experts involved in the project are the people behind the non-fungible token phenomenon, CryptoKitties.

Ethereum has aroused the interest of the entertainment world not only for being a financing tool.

In the year 2023, Ethereum: the infinite garden, a documentary that deals with the smart contract network developed by Buterin, will be released.

To carry out the audiovisual piece, the production team managed to raise 1,035.96 ETH in three days, equivalent to US$2.3 million.