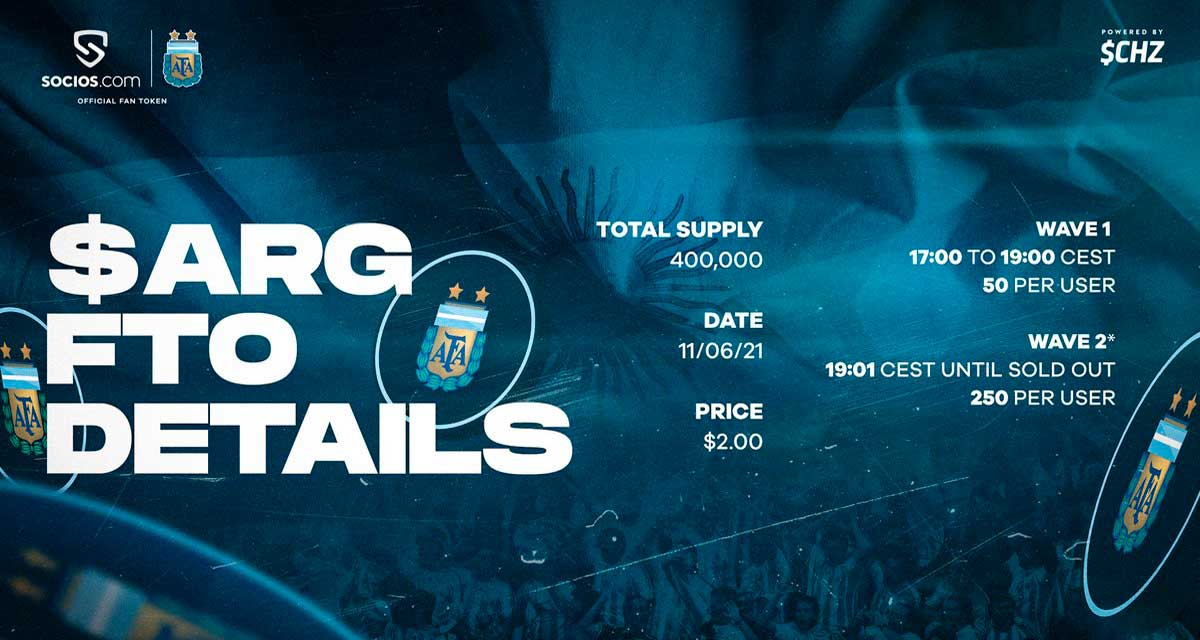 The Argentine Soccer Team launched the $Arg fan token through a Fan Token Offering on the Socios.com platform. The sale of 600,000 $ARG tokens sold out in just 3 hours after the sale started, causing the platform to crash due to high demand. The initial listing of the token was launched at a cost of USD$2 per unit. Chilliz Token went up more than 50%.

The announcement of the $ARG Fan Token launch was made directly from the official Twitter of Socios.com and the Argentine National Team on June 11th, 2021.

The launch of the token had an initial cost of US$2 per unit, in the first 400,000 units. After this first pre-sale, the price would be established according to the supply and demand of the market. The number of tokens was limited to a maximum of 250 per person, in this first presale. The total of tokens sold was 600,000.

At the time of the witting of this article, the price of the token reached the

Those users who could not acquire the tokens at the launch will be able to enter the Socios.com trading platform, which is available in the platform’s app, to try to acquire it.

This token aims to monetize the loyalty of the albiceleste fan base, allowing them to access promotions, exclusive discounts, and even participate in internal voting. Among these features, fans can choose the slogan of the team that will be stamped on the plane and the bus that will take the Argentine National Team to Brazil to the next Copa América 2021.

With the launch, Argentina becomes the first soccer team to own a fan token and joins teams such as Manchester City, Barcelona FC, AC Milan, Juventus, and Paris Saint-Germain.

Socios.com is a company dedicated to the monetization of brands through the creation and distribution and commercialization of personalized tokens. The Token that powers the Socios platform is called Chiliz and works on top of the Ethereum blockchain.

Read More:  What Is The App Socios.com And The Great Chilliz (CHZ)?

All the tokens that Socios.com generates for different brands or companies, such as UFC, belong directly to the Ethereum network and can be deposited in wallets compatible with this cryptocurrency such as MetaMask or Trust Wallet.

Users who wish to trade tokens, either with pre-sales purchases or directly in the trading section of Socios.com, must-own CHZ tokens since this is the platform’s payment currency.

For the year, however, cryptocurrency is still on the rise. Between the 1st of January, when it was worth US$0.022, until this Friday the CHZ registers gains of 1,490%.

Part of this year’s growth is due to new investment announcements and the expansion of the project to other countries, such as the United States and Brazil.

Chiliz has also been involved in sports other than football. In early May, for example, the company announced the creation of the Ultimate Fighting Championship (UFC) token, the largest MMA league in the world.