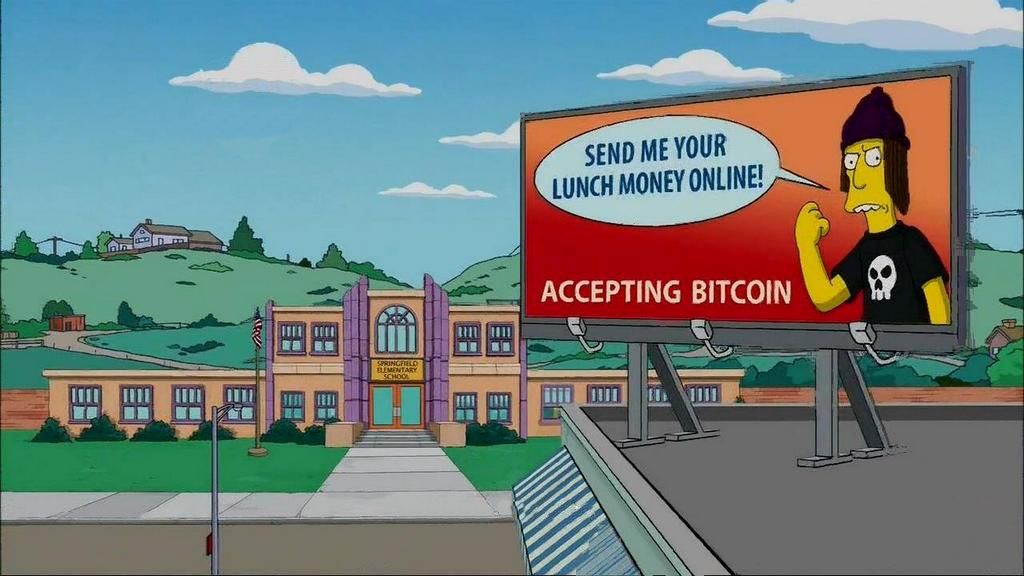 The Simpsons are the longest-running television series in history and one of the most recognizable animations in the world. But it has another reputation: that it is capable of predicting different important events.

In episode 18 of season 32, entitled “Burguer Kings”, a quick visual joke brought an interesting prediction for Bitcoin: The price of the currency would be “Infinite”. During the episode, where one of the plots involves Marge buying shares in a new restaurant chain and learning how to deal with price fluctuations.

During one of the scenes, Marge, the matriarch of the Simpson family, is watching on TV a commercial called “Crazy Cash” where a man (prisoner) gives investment advice.

In the scene you can see a price list:

In the price ticker, we can see Bitcoin ∞, meaning that the price of Bitcoin is infinitely positive, indicating that it has grown to the infinite.

Check out the scene:

Several jokes in a few seconds

The short section has a series of jokes that can be beaten at first sight. The first is the obvious joke with influencers and investment advisers, as the presenter of Crazy Cash is under arrest. Also, he sends a pearl to investors:

“Buy, buy, buy and then when you hear rumors about a problem, sell before everyone else!”

Prices also hide some other jokes in this episode of The Simpsons, such as a reference to the GameStop case, with the company’s stock (GME) appearing at $ 1 trillion and seconds later at $ -2 trillion.

Another “joke” in relation to stock prices is Tesla’s value, which says “if you have to ask, it’s because you can’t buy.”

Finally, another joke that deserves to be highlighted is the supposed value of US shares, stating that the value is worth – 1/4.

This is a joke that has many meanings, the most obvious of which is the fact that the price is a fraction and not in decimal numbers, making fun of how the US still uses the imperial standard of footage.

However, others saw an even deeper reference. The US recently started printing a large amount of money, printing about 25% of its total supply only in 2020. 25% is 1/4 of 100, meaning the US currency was worth 25% less for printing so much cash.

Obviously, everything is just a joke for the episode and it is unlikely to have any real impact on the Bitcoin network or the price of the currency, but it is nevertheless interesting to see the coin in such an important work of pop culture.

Tell us what you think about this prediction counting that Simpsons already predicted many other situations?