Squid Game Token gets a Rug Pull in a funny Livestream 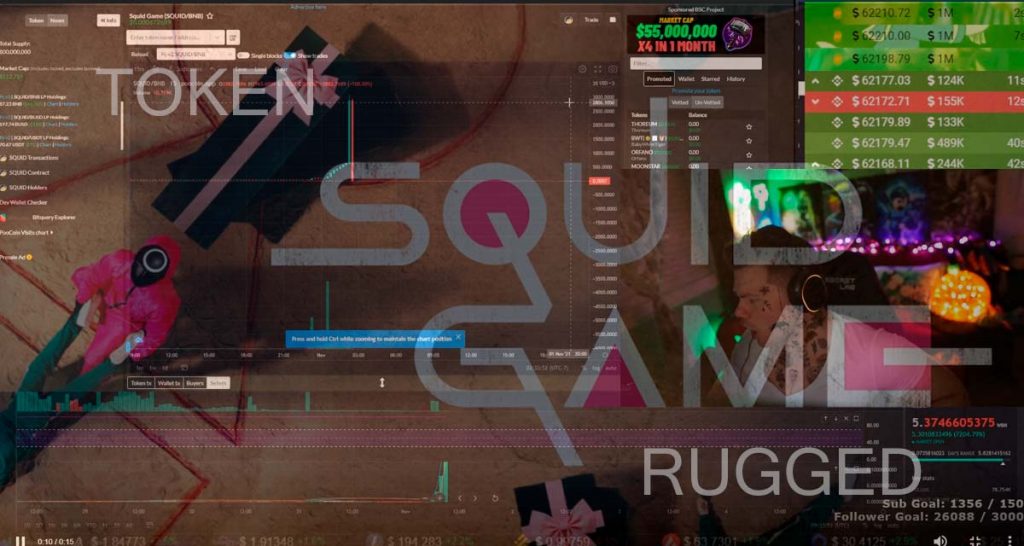 The_Dent was live-streaming the gigantic valorization of the Squid Game Token when the value went to zero, transforming one of the biggest and funny Rug Pulls yet. The_Dent turned the Livestream video into an NFT and put it up for sale on the OpenSea platform.

After the success of Netflix’s Round 6 series, known as the “Squid Game” in its original name, several tokens have emerged to take advantage of this wave and apply scams to cryptocurrency investors.

It is the case of the $SQUID token that despite showing an appreciation of 391% this Friday (29), several users have claimed that they cannot sell their coins, which is the main reason for the rise.

Another project related to the SQUID token has even had its Twitter account suspended and several other red flags indicating that the project is a possible scam being applied to investors in the cryptocurrency market.

In addition to using scenes from the series on its page, trying to impersonate an authentic Netflix product, the page also tries to deceive users by mentioning Elon Musk’s tweets about the series, taken out of context to say that the billionaire would be promoting this token that, in True, it’s a scam.

Another sample of bad character can be seen in other examples, such as the quote from a tweet by the CEO of Binance about the series, again taken out of context so that potential victims think it is the promotion of this token.

According to their whitepaper, a mechanism called “anti-sell” prevents users from selling their tokens freely, imposing rules that cause the Token to have a shallow appreciation as $SQUID holders fail to make profits.

Users of BscScan warned that the token is a scam and claimed that 90% of followers on their social networks like Twitter, Discord and Telegram are robots. Despite this, some insist on defending criminals.

In addition, the creators of this token also created another token called Marbles Finance, another scam whose Twitter is already suspended.

The time the Rug Pull was caught Live by the Streamer The_Dent.

The Twitch Streamer The_Dent was following the cryptocurrency graph while performing a live stream on Twitch and luckily ended up capturing the exact moment when the SQUID cryptocurrency dropped from 5.82 BNB per coin to zero.

On its Twitter official account, he also posted the video, which you can see the moment, below:

This was likely the funniest video of the day for those who were wise and didn’t lose money in this scam.

For others still in a period of denial, it shouldn’t be so funny.

The high demand for dubious meme coins and designs is undoubtedly a bad sign for the crypto market as a whole since it ends up looking like an online casino, where people throw money away while deluding themselves that they can get rich.

A Rug Pull Turned into an NFT

As the clip begins to go viral in the cryptocurrency community, streamer The_Dent is proving to be a true entrepreneur. He turned the video into an NFT named The Squid Game’s Rugpull and put it up for sale on the OpenSea platform.

So far, the most significant offer of this NFT is 0.5 ETH, and this one shows us that the market is cruel with stupid investments.

As always, we recommend that you invest in solid projects and do your research on them. Many projects are only alive because of the Bitcoin appreciation and will die as soon as it gets the next dip.