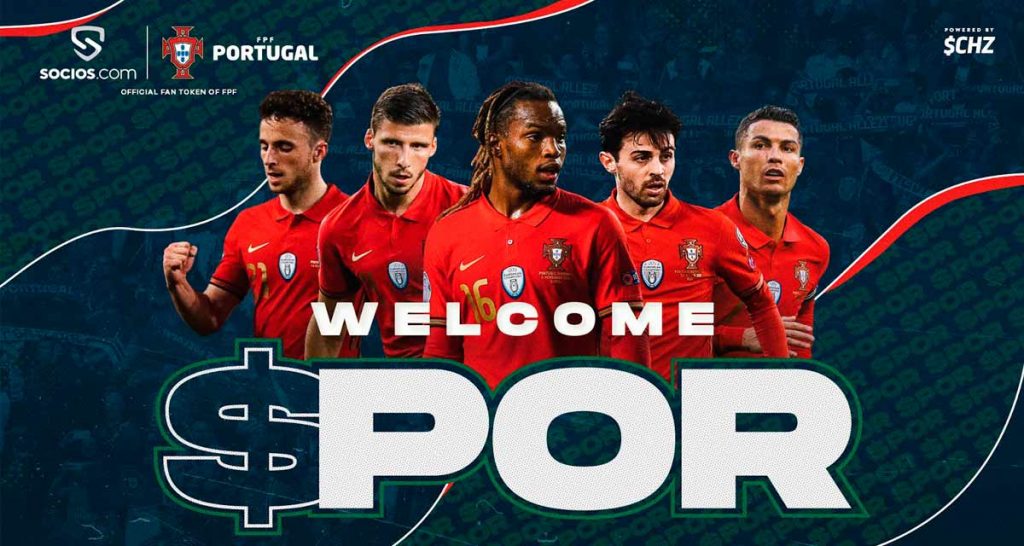 The “Federação Portuguesa de Futebol (FPF)” – Portuguese Football Federation -, announced this Thursday, 24th 2021, that the Portuguese Soccer Team formed a partnership with Chiliz, the leading global blockchain provider for the sports and entertainment industry, launching its own FAN Token ($POR), on the “Socios.com” platform.

Portugal will launch the $POR Fan Token in the next few days, providing fans worldwide with a powerful new way to influence and engage with the Team, while today, 24th June 2021, it will be released on socios.com App for Portuguese Fans.

Portuguese Team announced at Twitter, along with Socios.com and Chiliz, the launch of the Token.

This operation occurs through a partnership with Chiliz, a global blockchain provider for the sports and entertainment industry, which has its own “token” with the same name and a market capitalization of 1.2 billion euros. For fans to be able to purchase and exchange these “digital cards” through the application, they must have a digital wallet with this “token.” Each unit currently costs just over 20 euro cents.

“Through this partnership with Socios.com, we aim to continue strengthening our connection with millions of Portugal fans around the world. The launch of the $POR Fan Token will allow us to create new ways of reaching our supporters and interact with them in new and innovative ways. This will create new opportunities to engage fans with the Portuguese Team like never before, providing them with exclusive benefits, experiences, and rewards.”

For the moment, token holders can participate in some simple club decisions such as the external appearance of the team bus or choosing the music that will be played in the stadium, as AS Roma is doing at the moment.

It is worth noting, for those who still don’t know, that a “Fan Token” is not the same as an NFT ( non-fungible assets ) as these are fungible digital assets, i.e., services that are, in this case, exclusive to clubs or national teams, serving as a bargaining chip.

“Right now, football fans across the continent are sharing the same dreams and backing their teams to succeed in the Euros. Moments like these remind us of how great it is to be part of a community of fans and how good it feels to experience a close connection with the teams we love.”

“At Socios.com, our mission is to help fans feel that same sense of community and connection with their teams, not just during the big games, but all the time.

“Portugal joins a movement that will create a better relationship between supporters and the teams they care about — an unparalleled shift from passive fans to active participants. We’re very proud to welcome them as our second national football team partner and the 40th major sporting organization overall to join our rapidly growing network of partners.”

According to Dreyfus, the $POR token will be exclusive of the socios.com platform and bought with Chiliz ($CHZ).

According to Socios.com, more contracts are already signed, and more fan tokens will be launched in the future.