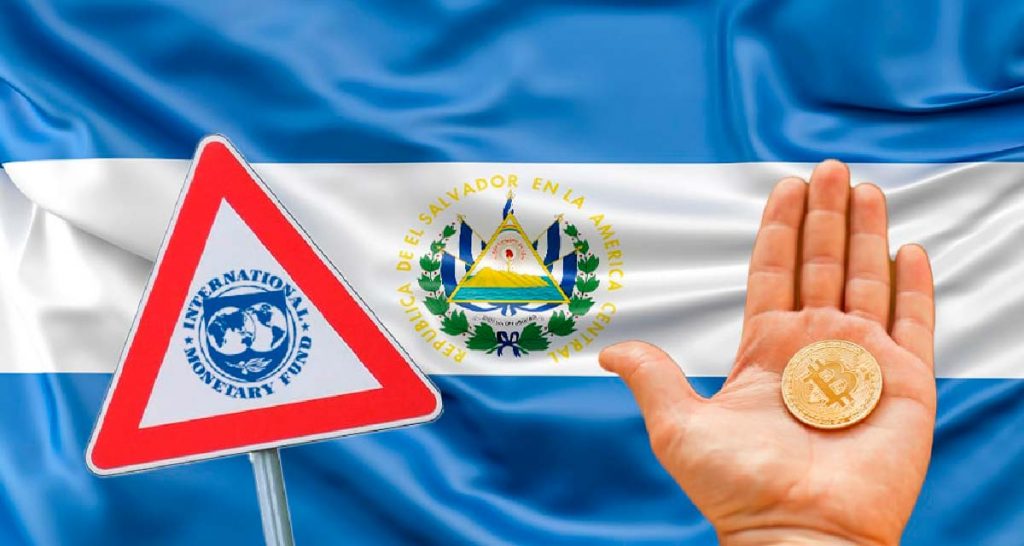 The organization advised that the country’s authorities restrict the scope of the Bitcoin law by removing Bitcoin’s legal tender status, according to an International Monetary Fund statement published on Tuesday, January 25th, 2022.

IMF executive directors representing the fund’s 190 member countries spoke of “Bitcoin’s risks” to “financial stability and consumer protection.” The IMF was also concerned about the risks connected with the issuance of Bitcoin-backed securities.

The IMF seems concerned that cryptocurrency adoption may lead to “contingent fiscal liabilities.”

According to their projections, the fiscal deficit will reach 5% of GDP in 2022. With “current policies,” public debt would rise to around 96% of GDP in 2026, something they consider an “unsustainable trajectory.”

According to the IMF, adopting a cryptocurrency as legal tender carries “major risks to financial and market integrity, financial stability, and consumer protection.”

In this sense, they urged the Salvadoran authorities to “limit the scope of the Bitcoin Law.” For this -according to the IMF- bitcoin must be eliminated as legal tender.

Also, some members of the IMF Executive Board said they were alarmed by the risks involved in the issuance of bitcoin-backed bonds, which the authorities of El Salvador plan to launch next February.

It is not the first time the IMF advises El Salvador concerning Bitcoin.

The IMF is not the first time it has made a call to the Government of El Salvador regarding bitcoin. In June 2021, when the Bitcoin Law was enacted, the financial body also expressed its concern.

At the time, Gerry Rice, IMF spokesman, argued that “the adoption of bitcoin as legal tender raises several macroeconomic, financial and legal issues.”

In the current report, the IMF goes further and proposes to remove the scope of the law altogether.

The IMF’s stance joins that of U.S. rating firm Moody’s. A few days ago, an analyst from this company warned that risks for El Salvador would increase if the government continues to buy more bitcoin, significantly for payment capacity and its fiscal profile.

In November 2021, El Salvador’s President Nayib Bukele announced plans to create Bitcoin City, a city built from scratch whose economy will be centered on bitcoin mining and powered by a volcano.

Despite being intended to support democracy and free markets, the reforms mandated by the IMF in exchange for its loans have historically included severe cuts to social spending and industrial policy.

El Salvador, a low-income, high-debt country, is negotiating one of its $1.3 billion loans with the IMF. One obstacle was the country’s recent adoption of bitcoin as legal tender, and the IMF signaled that it was not too happy with this idea.

“Given Bitcoin’s considerable price volatility, its use as legal money poses major concerns to consumer protection, financial integrity, and financial stability,” stated the IMF in a statement.

Read More  The US Praises Bitcoin and the cryptocurrency Industry

The IMF added, “Because of these risks, Bitcoin should not be used as legal tender.”

Today, January 26th, 2022, after the last warning from IMF, Nayib Bukelé shared the AFP news along with a meme from The Simpsons on its Twitter account saying: “I see you IMF. That’s very nice.”

Many individuals replied on that Twitter post, emphasizing the good and bad of both the IMF and Bitcoin, along with many memes concerning IMF.

Will IMF win the pressure? Or will El Salvador get out of the Monetary Fund trap alive and well to show the world that cryptocurrencies are good instead of bad?!