Illuvium (ILV): the new NFT 2.0 game for the Metaverse 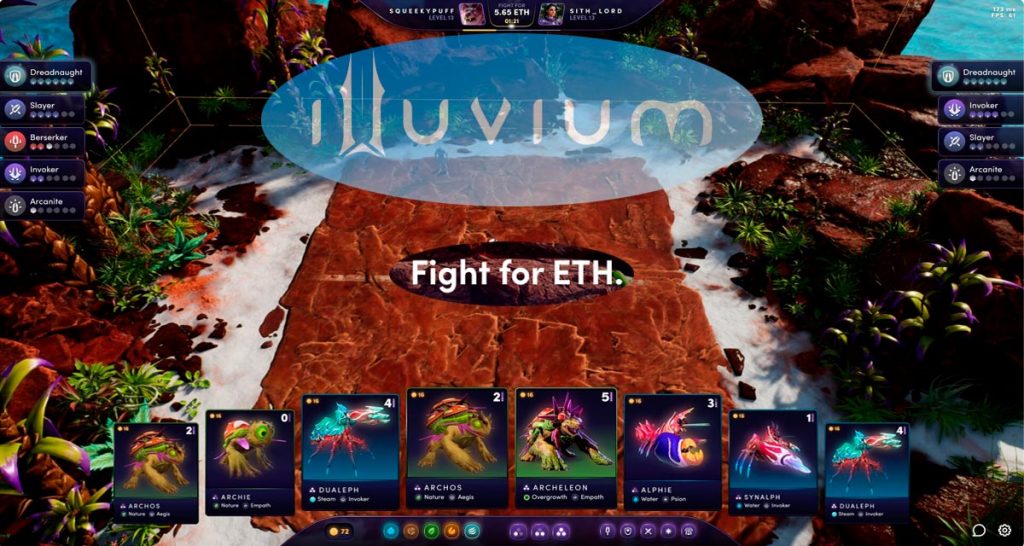 Will the Illuvium project deliver all the AAA experiences and investor expectations? That’s what we will know when it is released in 2022.

Illuvium is another blockchain RPG game within a virtual world that includes virtual reality technology and augmented reality: the Metaverse.

The game will be launched only in 2022, but its cryptocurrency (ILV) has increased by more than 170 percent between October and December 10, 2021.

So, What is Illuvium?

Illuvium is a new Metaverse 3D RPG game that lets you create characters and enjoy gameplay in real-time.

It offers the community a unique opportunity to collect, trade, battle, and earn rare in-game items.

Players will be able to build a collection of monsters that can be grown in power over time, and players can use them to venture into more dangerous regions or fight other players.

The developers want the game to be of excellent quality. Thus the characters are being developed by some of the world’s most outstanding artists, such as Aleksandr Kirilenko.

Some of the main features of the project are:

It is now possible to stake the ILV token on Illuvium’s website to encourage currency liquidity on the platform.

The Developers has allocated 3 million ILV, equivalent to 30% of the maximum supply, for participants who contribute liquidity (for three years) and participate in rewards programs.

The beta version will be formally published in the first quarter of 2022.

If you want to stay up to date on the project’s developments, you should follow the game’s primary social network accounts — Twitter and Medium.

As with traditional RPG games, there will be five possible classes :

The game will feature over 100 different Illuvials — the game’s creatures — in the form of non-fungible tokens (NFT), which will connect with one of five elements: water, fire, earth, air, and nature.

Illuvials can be customized and created by combining the five affinities, such as Dust (Air + Earth) and Ice (Air + Water).

While class and affinity are the essential attributes, each Illuvial will have many additional features that help determine the player’s combat strength. It includes attack damage, attack speed, and ferocity.

The characters in the game will have three levels of evolution. Over time, they will evolve, taking on new and more powerful forms.

The first character level is the most common to find. However, it will be progressively more challenging to capture, as the appearance rate will be linked to the amount of what has already been found.

Illuvial power also varies and will be loosely related to their rarity.

The game modes in Illuvium can be Adventuring, like Story Mode, or Battle Arena, subdivided into two modes.

In the Battle Arenas, players will play two distinct modes, the Ranked Arena or the Leviathan Arena.

The most exciting thing is that spectator players will be able to place bets on the results of the matches and obtain profits (or losses).

Ways to earn currency in the game:

Hunting characters will be one of the sources of income. In addition, the player will be able to improve the Illuvials and sell them on the IlluviDEX exchange, the game’s official marketplace. The sale allows users with less time to play to acquire an Illuvial North without investing a lot of time.

2. Have you prepared to pick up the pickaxe?

The game allows you to extract minerals from the planet’s surface and transform them into valuable items to be sold on IlluviDEX.

The battles are in a 3D Auto Battler similar to DOTA Auto Chess or Teamfight Tactics, where players will use their collection of Illuvials to fight each other and will also be a source of revenue.

Other additional game modes have already been workshopped, with several having their own thorough Game Design Documents. Expansions will be voted on through the DAO, and the devs are looking forward to seeing how it plays out.

So, in summary, users will be able to stay on top of a 3-way battle:

Another exciting and innovative point of the game is that, when playing the adventure mode, the winning players will be able to capture the defeated Illuvials. For this, they must use fragments (shards), analogous to a poke ball in the Pokemon game.

More substantial fragments make the probability of capturing more fantastic characters. The weaker ones, however, may not be able to catch them.

Anyway, whoever is successful, wins the opponent’s Illuvial.

The ILV Token has several applications in the Illuvium ecosystem. Its three main benefits:

The game has a unique Yield Farming reward system where ILVs will be blocked for a year before the tokens can be withdrawn.

However, there is an option to skip unlock times and convert the original asset into a secondary token, called Escrowed Illuvium ($sILV).

When claiming $sILV, users will receive the equivalent in US Dollars (USD). However, the currency cannot be traded through conventional exchanges.

The three strengths in the game that Stands out

In addition to offering the ability to play for free, it takes advantage of the blockchain Immutable X (IMX), a second-bed ( Layer-2 ) scaling technology from Ethereum.

In other words, users will have zero gas fees for minting or exchanging assets, as well as transaction times under one second, all with user-maintained custody. This strategy seeks to eliminate (or drastically lower) barriers to entry.

The costs are a determining factor in usability, earning money playing, and scalability of blockchain projects.

In other words, the trend is for the game to get massive player adoption — which, of course, tends to increase the price of the token exponentially!

Its maximum supply is only 10 million units. In other words, very low for the world of cryptocurrencies, meaning that the total amount of tokens available in the market for users/consumers are scarce.

A practical and well-known example is Bitcoin, with a maximum supply of 21 million units, an “insufficient” quantity for significant demand.

Consequently, it creates scarcity, and its price tends to rise over the years. The same reasoning can be adapted for Illuvium.

Axie Infinity, the most popular blockchain game that started the era of “Play to Win” games, to begin, the player must have a minimum of three NFTs.

On the contrary, Illuvium, as mentioned before, has no entry cost, not even concerning fees.

The main games that pay their players are Descentraland (MANA) and Axie Infinity (AXS), as shown in the image below.

However, analyzing it with a more critical point of view, they are only indirect competitors. They do not have the same style of play, graphic quality, and gameplay opportunities as Illuvium.

One game that wants to go head-to-head with Illuvium is Star Atlas (POLIS and ATLAS), under development on the Solana network and scheduled for release in the first quarter of 2022.

The project, which will also have AAA quality, has shown growing numbers of worshipers worldwide and is another one that promises to revolutionize the blockchain gaming world.

The game promises to deliver an emotional experience in an intriguing and rewarding way throughout the entire process, from discovery to exchange.

The intention is not to retain just for the possibility of earning money, but for the quality and fun of the game, winning over loyal fans.

To give you an idea, Illuvium Twitter already has more than 192 thousand followers!

The number of ILV token holders has risen during the last three months.

This strategy tends to be essential for the Illuvium project not to be just another hype in the play-to-earn gaming world and last for several years — just as Pokémon persists for decades.

Will the Illuvium project deliver all the AAA experiences and investor expectations?