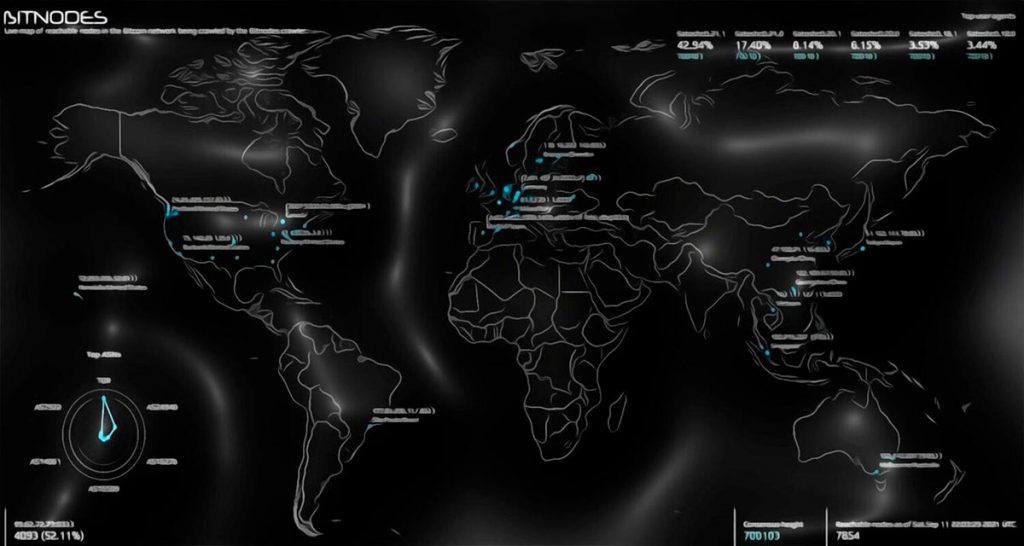 What is a Bitcoin node?

A Bitcoin node is any computer that runs Bitcoin software and stores the entire blockchain. Nodes validate each block and transaction before adding them to the blockchain. Thus, they serve as arbiters of the network, defining and enforcing the rules about which transactions and blocks are valid and which are not.

Bitcoin nodes share new blocks and transactions to keep each node up to date on the state of the blockchain. This sharing takes place over a peer-to-peer network; each node directly connects to several other nodes and shares data with those nodes.

This is remarkable because Germany’s population is about four times smaller than the US, while its economy is about five times smaller, yet it managed to overtake the US.

This appears to be in part because the number of US nodes dropped during this period by about 700 publicly accessible nodes, while the Germans held the line.

It’s not clear what these nodes are used for, as they can range from a kid in the basement playing with Bitcoin to a global entity like Coinbase or Binance.

However, by the looks of it, it’s a little obvious that Germany is an underappreciated programming power, in part because some American programmers have chosen the country as their residence because of its strong privacy laws.

One of the most striking images of our times is Google Street View, which covers the entire US and Europe, but almost nothing in Germany.

There is also the Chaos Computer Club (CCC) in Germany, which is described as the biggest hacker association in Europe, with 7,700 registered members.

Also, there are some Bitcoin programmers there, of course, including some Bitcoin core developers, and who knows, Satoshi Nakamoto himself might be in Germany, this no one knows.

Another explanation, however, could be that the US is facing some backlash due to entrenched banking interests that have significant influence over regulators that are engaging in a takeover without a mandate from legislative bodies.

Some cryptocurrency companies are now beginning to ban the US from participating to deny its jurisdiction, creating a slightly more restrictive atmosphere there.

This indicates a kind of shifting wind as the global influence of the US diminishes, in large part to the gains of Europe, which lacks mass surveillance and does not have the same level of economic capture by the banking establishment that seems to have all the key positions in the USA.

The political environment in Europe is therefore much more permissive and liberal, with Germans free to reveal their location without fear of the state. While in the United States, two decades of war have eroded constitutional limits on state power, as well as general political accountability to some regulators acting as a government in its own right.

Talent wants freedom, so it’s no wonder that in what must now be the freest country in the world by size, this is where most Bitcoin nodes are running, and per capita is by far.

The information presented here may however only be temporary, as Bitcoin nodes are constantly being turned on and off for whatever reason.