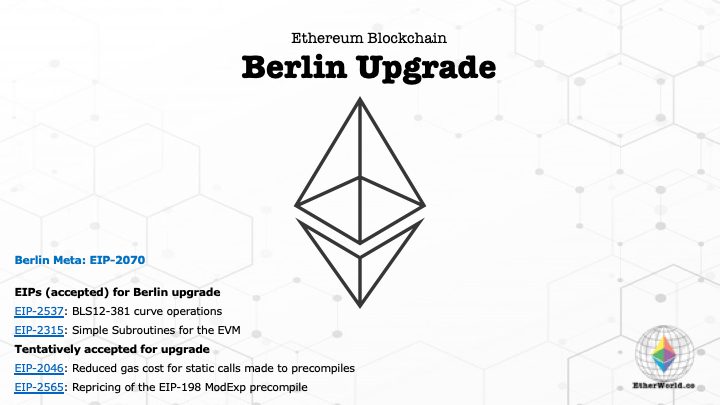 Four improvements will be implemented in the Ethereum blockchain, the update ultimately aims to make the network cheaper and faster by restructuring transaction fees.

Although Ethereum is faster than Bitcoin in terms of transactions per second, Bitcoin remains digital gold, while Ethereum is seen more as silver.

The update is scheduled to take place at block 12,244,000, which will be mined sometime on April 14, and it will be possible to monitor the exact time via the website ethernodes.org.

Will Bitcoin be overtaken by Ethereum?

Looking at investors, it is safe to say that one group is betting on Bitcoin as a store of value, while others are betting on Ethereum for considering the platform the future of technology. It is as if one group is investing in a “new precious metal of nerds” and the other investing in “Google of the future”.

When comparing the performance of Bitcoin and Ethereum over a period of one year, it is possible to see that Ethereum has done better, since in the last 365 days the cryptocurrency has appreciated by almost 1200%, while Bitcoin has appreciated by 732%.

That is, Bitcoin underperformed 468% less than Ethereum.

From now on, it means that Bitcoin will be really overtaken by Ethereum?

The graph below shows that Bitcoin practically got into a space rocket and started towards the moon, while Ethereum, despite having appreciated, became more timid.

From this point of view, would it be better to have invested in Bitcoin or Ethereum?
It depends on the amount invested, really.

But, if the investment value is less, the results will change.

For example, if you had bought a thousand dollars in Bitcoin and Ethereum a year ago, today you would have exactly 0.14 Bitcoin and 5.88 ether.

Each currency appreciated for different reasons.

While Ethereum has risen through developer adoption, growth in the Decentralized Finance (DeFi) ecosystem and collectibles in the form of non-fungible tokens (NFT), Bitcoin has appreciated because of the growing institutional adoption, which has invested in the currency as a store of value .

To assume that Bitcoin will stop being adopted and that Ethereum will replace it does not make sense, it is like saying that you will no longer have gold to have a computer.

You may as well have both.

Notably, the Berlin update is part of a broader development of Ethereum, which will be upgraded to version 2.0 by the end of 2022.

Ethereum holders, brokers and portfolios do not need to do anything, the updates shift more to the developers side.

So, it doesn’t make much sense to expect this specific update to make Ethereum outperform Bitcoin remarkably, despite, of course, the currency has the potential to appreciate.

On the other hand, an update scheduled to take place in July may actually cause the asset to skyrocket.

Named as London, the update will implement a new fee market protocol, which will standardize costs for the entire network. Thus, it will avoid situations such as the unbridled increase in the average transaction fee.

In addition, the update will implement a burning mechanism that should change Ethereum’s monetary system to a deflationary scheme.

Vitalik Buterin, the co-founder of Ethereum, predicts that the network will be 100 times faster before upgrading to version 2.0.

Ethereum, therefore, will have significant updates throughout 2021 and 2022 that should boost the asset to values ​​never seen before. Some analysts believe that the digital currency will reach the mark of US$10,000 per unit when everything is implemented, that is, by 2022.

The Berlin update is just the first step. Despite the optimism with the network, it is not possible to say with certainty that the currency will appreciate so much. Ethereum has many competitors and the winds may change.

What do you think about Ethereum new updates? Tell us below in the comments.
And if you like this article, please share.