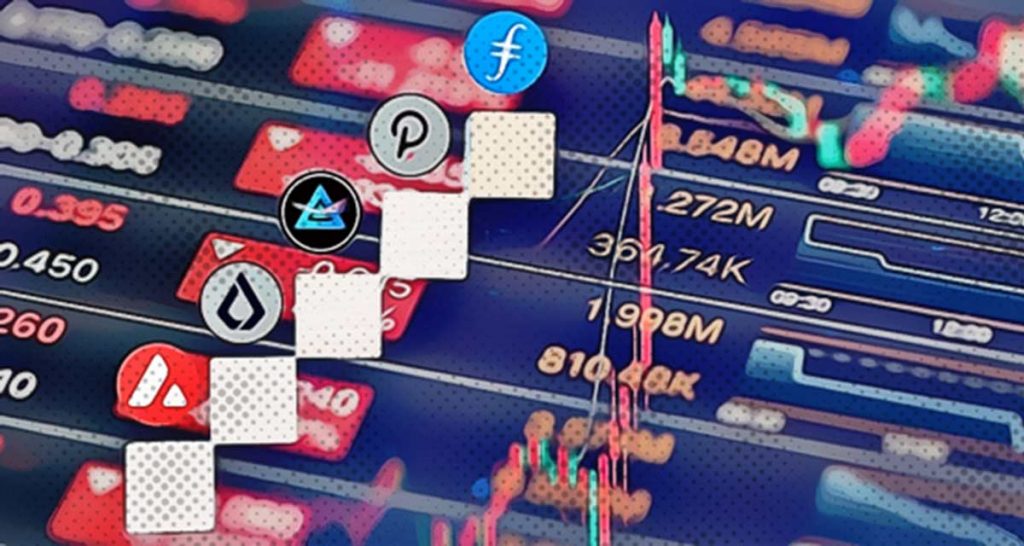 The CryptoMarket maintains its green balance in recent weeks. In this weekly top, we highlight Dogecoin and Filecoin as they return to green. Without missing Chainlink, Beam, AVA and Polkadot

From August 1 to 8, 2021, the cryptocurrency market remains green and prices tend to rise. More than 90% of altcoins rise in price in averages that exceeded 30%, according to Live Coin Watch statistics.

The weekly top is headed by Dogecoin (DOGE), which is fueled by bullish market sentiment. It is followed by Filecoin (FIL), which develops an app to operate hybrid contracts with Chainlink; and Beam (BEAM), which tests a new decentralized application for its governance system.

The five cryptocurrencies are completed with Polkadot (DOT), which is advancing in the development of improvements for communication between its parachains; and avalanche (AVAX), which created a new bridge to the Ethereum blockchain.

The price of bitcoin has continued to grow during these seven days, managing to approach USD 45,000 on August 7. The pioneering cryptocurrency could be heading for US$100,000, according to a Bloomberg analysis reported by Crypto DeFinance. On average BTC rose 8% in seven days, to trade at US$44,014 at the time of writing.

For Bloomberg analysts, the bitcoin price curve has been below its 20-week average, in its longest period since 2018-2019, which would be a bullish sign.

“Supply is declining while demand and adoption are increasing in most countries that welcome open speech and free-market capitalism,” the study states.

On the other hand, ether (ETH), also registered a significant rise. This week it exceeded US$3,000, a value that it had not reached since last May. The cryptocurrency traded between $ 2,113 and US$3,179 in seven days. On average it rose above 20%.

This week the long-awaited London update took place on the Ethereum blockchain, and with it, the EIP-1559 improvement proposal was activated. This implementation changed the mechanism by which fees are paid to miners, introducing the concept of ” tip ” and adding commission burning. The community hopes that, in the long term, this EIP will bring down the high network rates.

Other relevant cryptocurrencies by market capitalization are also on the rise. Litecoin (LTC) appreciated 5%; Cardano (ADA) advanced more than 8%, and XRP gained around 6%. This, while Polkadot (DOT) rises by 14% to place itself in the weekly top.

Amid a substantial rise in the price of dogecoin this weekend, analysts note that the cryptocurrency meme remains at the peak of popularity, gaining more followers.

According to the analyzes published in the media, the bullish sentiment that comes with the rise of bitcoin has also taken the followers of Dogecoin and Shiba Inu.

It is thus believed that the price changes of these cryptocurrencies, whose users have grown by almost 50% during the third quarter of 2021, promise users a more attractive return than that of traditional cryptocurrencies such as BTC and ETH.

Adoption levels are also growing. Since the end of July Burger King in Brazil accepts dogecoin in exchange for its Dogpper. Brazilian customers can purchase the curious Whopper-flavored dog biscuits for 3 DOGE.

This week the price of DOGE rose just over 24%. The cryptocurrency peaked at US$0.275 on August 7, returning to the values ​​it held during June. This, after going through a strong correction during July.

As of press time, DOGE’s market capitalization is USD 32,257 million and the daily trade volume is US$4,800 million.

In a blog post on August 6, the Filecoin team reported on the launch of a joint concession initiative with Chainlink. The plan is to advance the development of hybrid smart contracts that combine Chainlink’s oracles and Filecoin’s decentralized storage protocol in a single application.

“Hybrid smart contracts take advantage of the code that is executed in the chain of blocks ( on-chain ) with data and calculations from outside the chain ( off-chain )”, explains the writing. With this, the door is opened for the implementation of deeper integrations between both projects.

As of the dissemination of this news, the price of the network’s cryptocurrency, FIL, began a sustained rise that reached a peak of US$70.18 on August 7.

On average FIL appreciated by more than 20% in seven days. The market capitalization is US$6.067 million and the daily trade volume is US$459 million.

This week the privacy-focused Beam platform announced the launch of BEAM DAO Core on its testnet.

It is an application that, according to the team, will facilitate the transition to its new governance system identified as BeamX DAO, which is expected to occur in the third quarter of the year. The objective is that, soon, the governance of the ecosystem of this cryptocurrency will stop being directed by the Beam Foundation to function as a DAO.

Meanwhile, the platform’s cryptocurrency started steady growth as of August 5, with some corrections. The advance was over 20% when it touched a maximum of USD 0.69 on August 8, although due to the ups and downs, the weekly average closes at 17%.

The current capitalization of BEAM is USD 59 million and the daily trade volume is USD 11.7 million.

Polkadot promotes communication in the networks of its ecosystem

The Polkadot platform, through a mechanism known as XCMP (cross-chain message passing), now allows the exchange between parachains (small blockchains) and parathreads. The latter consists of small chains that connect to the network in a similar way to parachains, but that participate in the governance system of the platform.

As explained in a recent publication, XCMP has been developed through an alliance between Kylin Network, a platform with data infrastructure for DeFi and Web 3.0 powered by Polkadot; and Astar, a decentralized application of this same platform.

It should be remembered that Polkadot is characterized by working through the interconnection of small blockchains (parachains), which must exchange data with each other and distribute the transactions between the different networks to be able to execute them in parallel.

Until now, message-passing between strings was just a concept in the process of being implemented in the Polkadot ecosystem. Hence, this advancement is seen as a step towards full XCMP integration and “thus testing cross-string calls for full functionality, facilitating interaction between all strings.”

In this context, the DOT cryptocurrency gained almost 14% in seven days. The cryptocurrency began to rise substantially from August 4. Its price ranged between a low of US$17.14 and a high of US$21.59 on August 7th.

DOT’s market capitalization is estimated at US$19,864 million and the daily trade volume is US$814 million.

In an official blog post, AVA Labs, responsible for the development of Avalanche, announced the implementation of a new bridge between this blockchain and the Ethereum network which replaces the one that had been created in February of this year.

The note indicates that the new bridge, called Avalanche Bridge (AB), offers greater safety and speed, while also being cheaper. In the words of the founder and CEO of AVA Labs, AB represents a major improvement in the experience for users and developers of the network.

The brief adds that, from now on, Avalanche ecosystem projects can update DeFi applications and liquidity pools based on the token standards that operate on both Avalanche and Ethereum using AB’s bridge.

The price of AVAX, the native cryptocurrency, has maintained a steady advance since August 1, albeit with corrections. The rise became noticeable on the 6th, reaching a maximum of US$15.90 on August 7.

This price cap for AVAX coincides with the announcement of the upcoming launch of a series of non-fungible tokens (NFTs) for the 2020-2021 Bundesliga, Germany’s biggest soccer competition. The NFT collection will put up for sale the cards of the best players, rising stars, and memorable moments from the sporting event.

On average AVAX gained 13% on the week. As of press time, the market capitalization is US$2,575 million and the daily trade volume is USD 72.6 million.