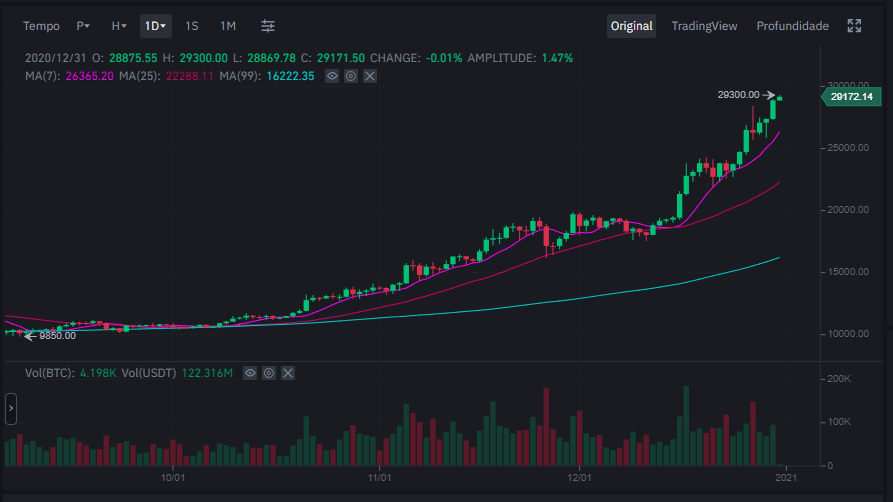 Bitcoin continues the race not slowing down and carrying all market with it. Bitcoin price new ATH just got to $29,000 and is aiming for $30,000.

The Cryptocurrency market is at the moment, with a Capitalization of up to $4 billion just in the last 24h. These surge levels have not to be seen since Jan 2018.
According to CoinMarketCap, the total Capitalization is sitting at $740 billion.

Bitcoin price continues to paint fresh all-time highs on a daily basis. Earlier today, CryptoPotato reported that the cryptocurrency has managed to break out once again and chart a new high at $28,600. However, it appears that there’s undoubtedly room for more.

In the past few hours, BTC has gone on yet another leg up, painting a fresh all-time high surpassing $29K – the current ATH is set to $29,010 on Bitstamp.

Analysts, however, predict that the price will go down early in 2021 allowing retail players to buy the currency for a low price.

“It is still quite bullish on an intermediate-term basis given that it just broke out to new all-time highs. I think we have a ways to go. Near term, my cycle composite shows us peaking out in early January.”

″[With] SPACs right now, you can make money at 10, 15, 20% a day. I just don’t think that investors have quite the appetite for crypto while the institutions are certainly very much heading in that direction.”

It should be noted that the second largest cryptocurrency (Ethereum) has also raised its price. According to Cryptopotato, it is very likely that the parallel movement of the last days will lead to crazy movements, which already are in progress.

At this time this cryptocurrency has a market cap of roughly $ 85 billion.