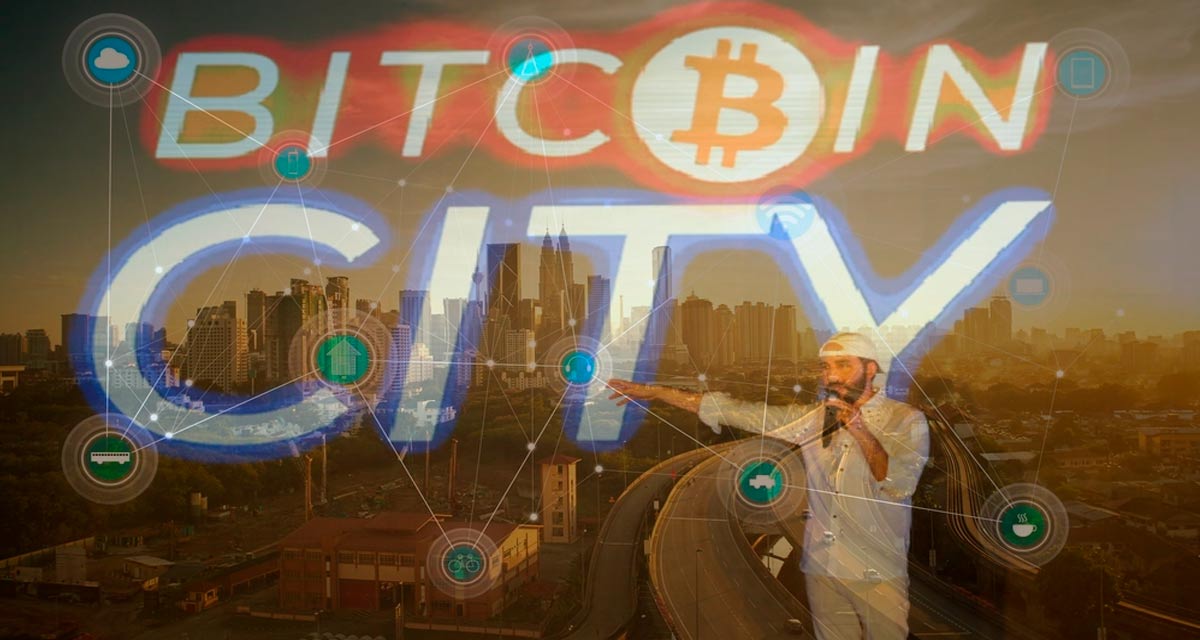 The Bitcoin City will be round, with a plaza in the center and a giant carved “B,” one of the main objectives of attracting foreign investors and tourists. The City will be provided with geothermal energy and almost free of taxes (except local VAT).

El Salvador President, Nayib Bukele, announced that in 2022 the construction of what they have called “Bitcoin City” would begin. It will be a bitcoiner city, with geothermal energy and almost tax-free.

Nayib Bukele stated that there would be no property, income, or municipal taxes and that the City would emit zero carbon dioxide. The only tax levied will be the value-added tax, half of which will be used to pay municipal bonds and the other half to fund municipal infrastructure and maintenance.

Although only preliminary information is available, the Presidential House of El Salvador, via its Twitter account, has provided some hints and advancements on what the City will look like.

The City will be located in southeastern Salvadoran, near the towns of La Unión and Conchagua. It is an area near the Gulf of Fonseca, on which both El Salvador, Honduras, and Nicaragua have coasts.

Initially, there are plans for the City to be supplied with geothermal electrical energy from the Tecapa volcano, located almost halfway between the new City and San Salvador, the country’s capital.

Later, it will become utterly reliant on the nearby Conchagua volcano. The City will be located in southeastern Salvadoran, near the towns of Conchagua and La Unión.

“The change from a global economy to a more balanced one at the local level incorporates innovative technologies,” indicates the Presidential House.

They add that they will be “based on a healthy circulation of resources and natural geothermal engineering.” All this, to develop “an environmental city.”

Bitcoin City is a circular city with a large “B” at the center.

Something that stands out about the new City is its circular design. In the center, there will be a square with a large ‘B’ of Bitcoin carved out.

Perhaps underground – the Museum of Bitcoin will also be installed there.

The Presidency explains that this “B” will be used to “allow light to enter the exhibition rooms” of the museum. In that institution, “people will learn about the evolution of money,” from stones to cryptocurrencies.

Although it will occupy only 2% of the City’s space, this transport infrastructure will be advanced and includes an airport.

According to government plans, it “will grow over time to accommodate not only the hardworking inhabitants of the East of the country but also tourists who will be interested in visiting the Bitcoin City.”

“It will promote the new needs of the cities of the microcosm, with a sense of community-based on public spaces as the center of social life, which will encourage new investments,” indicates the El Salvadorian Presidency.

They define city design as “a holistic approach to urban planning.”

This attractive investment is quite present in everything that concerns bitcoin in El Salvador.

During the closure of LaBitConf, the project was made by Bukele in English and not in the local language, Spanish.

The same is observed in many tweets of the president concerning bitcoin. Also, the City’s name seems more intended to attract foreigners than to relocate Salvadoran citizens.

Bukele also made other announcements during his LaBitConf closing presentation.

One of the announcements was made with Blockstream’s chief strategy officer, Samson Mow: the first bitcoin government bond.

It will be called Volcán and will be distributed on Liquid, a Bitcoin sidechain.

«Volcán intends to raise liquidity for USD 1 billion, as announced by Blockstream.

This money would be divided in half: USD 500 million will be added to the country’s bitcoin reserves, currently 1,120 bitcoins, and the other USD 500 million for infrastructure for energy and mining.

Samson Mow predicts that other countries will want to replicate the bitcoin bond launch.

For Blockstream’s CSO, the launch of these bonds initiates the “nation-state level FOMO,” as countries will compete to launch their version of this new type of financial instrument, which would have substantial implications on the adoption and price of Bitcoin.

Anyone can buy the bond for up to a minimum of one hundred dollars.

The evening of Saturday, November 20, was described by the Government as “a night full of great announcements for the country.”

According to the Presidency, El Salvador aspires to be the Singapore of Latin America.