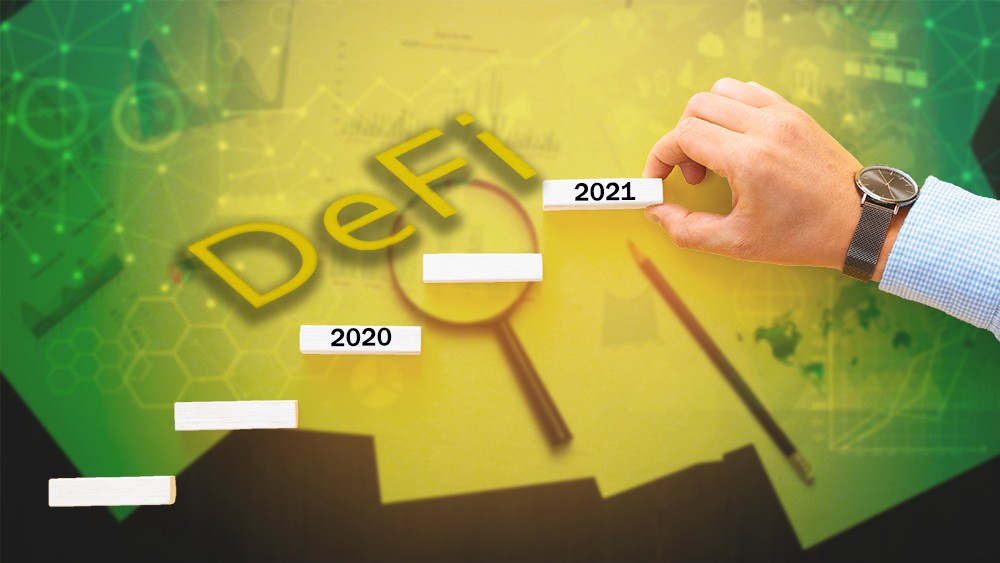 The value blocked in the different decentralized platforms (TVL), as the guarantee funds of the different operations are called, was USD 650 million at the beginning of 2020 and demonstrated security and scalability challenges.

DeFi platforms offer services to give and request loans, obtain returns for providing liquidity in decentralized platforms, speculate in certain assets, insure against risks, among other operations, without resorting to intermediaries. Most of these platforms use smart contracts on Ethereum.

The value blocked in the different decentralized platforms (TVL), as the guarantee funds of the different operations are called, was USD 650 million at the beginning of 2020. This past December 31, DeFi Pulse registered a TVL of USD 14,430 million.

DappRadar highlights that in 2020 the total volume of Dapps transactions exceeded USD 270,000 million, of which 95% corresponded to the DeFi ecosystem. This portal places the TVL in 2020 a little lower than DeFi Pulse, at USD 13,000 million.

While the locked value in DeFi exceeded $ 1 billion in February 2020, the market crash in March also affected the decentralized finance sector, which saw a 40% decline in TVL in the middle of that month. The recovery of the TVL came at the end of May, and managed to double in 40 days: by July 3, the TVL had exceeded USD 2 billion.

The lending area was the first to become popular among DeFi platforms. Maker started as the leading lending platform, followed by Compound. The latter was part of the great growth of DeFi during 2020 as we will see later. A third loan platform, Aave grew and came to dispute the leadership of the two mentioned platforms, thanks to innovation: the introduction of lightning or instant loans.

The loans introduced by Aave are granted without guarantees but must be paid in a transaction of the same block. In the short time between the receipt of the funds and the respective payment, it is possible to carry out arbitration or liquidity provision operations that yield benefits to the person requesting the loan.

Another innovation was the issuance of governance tokens from some of the DeFi platforms, which could be earned by granting or repaying loans, or by providing liquidity.

Part of DeFi’s momentum in the second half of 2020 was due to the mid-June launch of the COMP token from Maker’s closest rival, Compound. This launch was a major turning point for DeFi, not only helping to double the TVL and move Maker to second place. The compound also contributed, together with Maker, to bring the value of the TVL in DeFi to USD 3 billion by July 21, and end the month at USD 4 billion.

This growth was supported by the trend, also innovative, of yield farming or interest harvest, which consisted of an incentive strategy for both lenders and borrowers. While the strategy was initiated by Compound, it also included additional incentives on other platforms, with the introduction of the YFI token from the yearn.finance platform. This platform hosts various services, including moving funds between various platforms. It could be defined as an automated market maker that uses a vault and governance system to support its operation.

Lending platform Aave tripled its locked value in August to surpass $ 1.4 billion and take the lead among DeFi platforms. Aave’s performance joined the growth of yearn.finance and the other platforms, to make August the month with the highest growth to date, as the locked value went from USD 4,000 million to USD 8,000 million at the end of August.

September was a setback month for the cryptocurrency market. In fact, it is the only month, along with March, of negative returns. But for DeFi platforms, in September the TVL increased by 32%, reaching USD 10,530 million. Thus, the quarter from July to September registered the highest DeFi growth slope: 560% in the year.

In the last quarter of 2020, DeFi’s growth was sustained, albeit at a much more moderate pace compared to the third quarter, but it nonetheless contributed to a year of explosive growth in decentralized finance. The implications, as we will see later, are very positive for Ethereum, although the accelerated growth also had negative consequences for many users from the point of view of the security of their funds.

Through the increasing trading of tokenized bitcoins on the Ethereum network (ERC-20 tokens whose price follows the price of BTC) the presence of Bitcoin in DeFi increased dramatically. At the end of 2020, there were more than 26,000 BTC locked in DeFi, according to DeFi Pulse, and a total of BTC tokenized in Ethereum of more than 141,000 BTC. These “wrapped” BTCs are worth $ 4.3 billion.

Although 2020 was a historic year for bitcoin, in which it registered an annual return of 402% and the period ended very close to USD 30,000, the fact that the vast majority of DeFi platforms work on Ethereum, not only increased the volume of transactions. Also, the increasing activity resulted in a driver of the price of ETH, which closed the year at USD 740, representing a return of 469%.

Unique addresses on Ethereum, according to Etherscan, went from 84.16 million to 131.11 million last year, a 55.7% increase. CriptoNoticias reported that 170,000 Ethereum addresses were created in a single day on December 16. Many other Ethereum metrics increased in 2020, especially in the second half.

Ethereum miners, as reported by CryptoNews, earned more commission income in the third quarter than from coin issuance rewards per block mined.

While Ethereum is the main network on which smart contracts have been deployed to provide access to DeFi, other networks such as Tron and EOS have also had an impact on that market.

In these networks, versions of the platforms of the most successful decentralized exchanges (DEX) of DeFi in Ethereum, such as Uniswap, Curve Finance, or Balancer, have been mainly deployed. Uniswap was the first decentralized protocol for the provision of liquidity on Ethereum and ranks third among DeFi platforms. There are versions of Uniswap on Tron and EOS, such as Defibox on EOS.

As a result of the vigorous growth of DeFi platforms, and the competition between them for competitive advantages, malicious actors exploited numerous vulnerabilities that were introduced with new features, without the project managers performing the required checks and audits comprehensively. For example, after the introduction of automation of trading operations and the handling of deflationary tokens, a vulnerability in the Balancer exchange platform allowed us to steal USD 450,000.

In mid-November, CriptoNoticias reviewed a report from CipherTrace that reported an increase in hacks of DeFi platforms from January to October 2020. Of the 468 million dollars stolen by hacks in that period, 21% or USD 98 million corresponded to DeFi platforms. Also, CriptoNoticias published a compilation of the 10 biggest hacks carried out on DeFi platforms, during 2020.

DeFi applications have the potential to democratize access to finance, although their wider dissemination requires effectively strengthening the security of the platforms. The multiple security incidents that occurred in 2020, as a result of the increasing use of dApps, resulted, according to DappRadar, in hacks and exploits that led to the theft of more than USD 120 million.

Of the 238 new dApps registered by DappRadar in 2020, 45% run on Ethereum. This was coupled with increased activity in DeFi to challenge the scalability of that network. Ethereum not only had to face the growth of DeFi but there has also been growth in non-fungible tokens (NFT) and in-game dApps.

Last October, the co-founder of Ethereum, Vitalik Buterin, presented a proposal to improve the scalability of that network,  independent of the transition already started towards Ethereum 2.0.

Although at the beginning the vigorous growth of DeFi in 2020, exceeding 2,000%, and 30% in the few days elapsed of 2021 was mentioned, the value of the funds blocked at the time of writing (18,500 million dollars) is still modest compared to daily volumes or the total value of the cryptocurrency market, which is less than 20% from reaching a trillion dollars. However, with growth like that shown so far, DeFi can represent greater access to finance without intermediaries for people who are not currently banked.